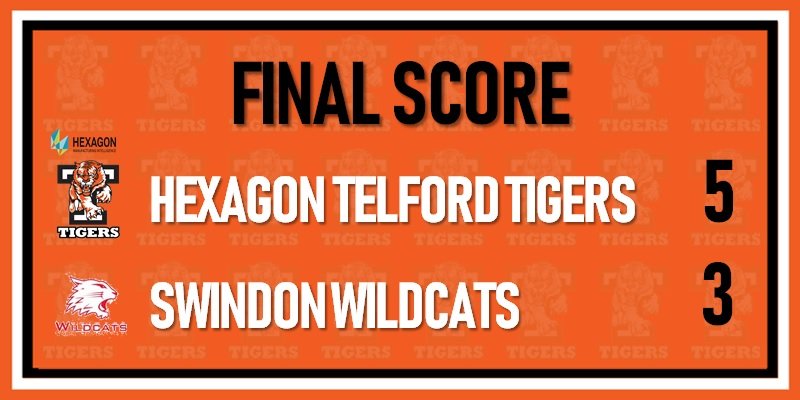 Tigers Claw Their Way To Autumn Cup Victory. Hexagon Telford Tigers 1 played the second of their back to back games against Swindon Wildcats in the Autumn Cup on Sunday night at Telford Ice Rink. Tigers had lost 6-4 in Swindon the previous night having fought back from a 5-0 deficit but fell short of a comeback win.

Tigers’ Autumn Cup hopes required a victory after defeats in the three previous games and Tigers were looking to avoid a repeat of their recent habit of falling several goals behind before the team got going.

Tigers had a good chance early on with Adam Taylor going close with a back handed wrist shot that was saved by Swindon net minder Michael Crisp. Tigers opened the scoring in the 7th minute, Dan Mitchell battled hard to win the puck, allowing Jason Silverthorn to fire a hard wrist shot at the goal, the shot was saved by Crisp but Andy McKinney collected the puck, skated around the net and slid the puck home before Crisp could recover his position.   Denis Bell in the Tigers’ goal was then called on to make a sprawling save to keep the Tigers ahead.

Tigers were then undone when Swindon were given a 5 on 3 power play after Corey Goodison and Scott McKenzie were sent to the penalty box. Swindon’s goal had an element of fortune about it. Silverthorn won a face off and attempted to clear the puck but his clearance hit a defender’s skate and deflected into the path of Edgars Bebris who was unmarked in front of goal and beat Bell with a wrist shot to level the game. Tigers finished the period on the front foot but could not add to the scoresheet.

Five minutes into the 2nd period Tigers were given a 5 on 3 power play when Swindon’s Adam Harding and Jan Kostal were given penalties. Tigers took full advantage of the extra players when Silverthorn’s pass found McKenzie unmarked in front of the goal. McKenzie took his time and fired a perfect wrist shot past Crisp to give Tigers a 2-1 lead.  Whilst Kostal was still serving his penalty, Swindon’s Luc Johnson was given a tripping penalty providing Tigers with another 5 on 3 power play. Just as Kostal’s penalty ended and he returned to the ice, the puck broke to McKinney who scored his 2nd goal of the night with an unstoppable shot from the blue line past the screened net minder. Tigers ended the period firmly on top but needed a terrific save from Bell to maintain the 2 goal lead at the break.

Tigers had a further power play in the 46th minute when Bebris was called for tripping, but Tigers lost the puck on the offensive blue line and were caught by Swindon who had a 2 on 1 breakaway and scored a short handed goal from Aaron Nell, to cut the lead to 3-2. And it was Nell who would level the game in the 52nd minute when Tigers failed to clear the puck from their zone and Stephen Whitfield’s shot was deflected into the net by Nell.  Tigers refused to give up and took the lead in the 58th minute when McKinney and Danny Rose combined in centre ice to send Rose clear 1 on 1. Rose hit a stunning back handed wrist shot past Crisp into the top corner to send the Tigers’ fans wild.

Swindon pulled net minder Crisp for the final minute, but it would be Tigers who had the last goal of the contest. McKinney scored with a shot from his own blue line into the empty net to seal the victory and complete his hat trick.

Man of the Match: Denis Bell.

After the game Coach Tom Watkins said, “ It was an awesome job by all the boys tonight, there was a lot of commitment, we battled hard and got rewarded with some power play goals. We were able to play with the lead all night which is a big plus and I was delighted with the character we showed when Swindon tied it up.

We had a few guys missing this evening but we also had some big performances. Denis was a standout, kept us in it at times which gave us a chance to win and showed the quality we know he has. Young Henry Adams had a hell of a game against one of the best teams at this level. We threw him in at the deep end and he repaid us with a very mature performance, he kept it simple, made good decisions and was physical in the right places.  Overall it was a solid team effort tonight and we played with the right energy.”

Watkins added, “I would like to say a big thank you to everyone who supported Zac Oliver this evening. It was a real pleasure to welcome his family to the game tonight and let’s hope we can see Zac at a game in the near future.”