Tigers Claw Their Way To Victory 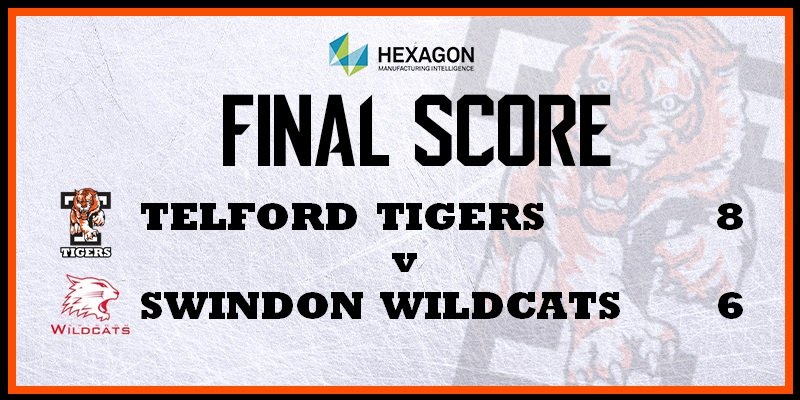 Tigers Claw Their Way To Victory. Hexagon Telford Tigers faced off against Swindon Wildcats on Sunday night at Telford Ice Rink. The game saw a clash of the top two teams in the league, with Tigers leading their Wiltshire rivals by three points, albeit having played a game more.  Tigers had won the previous evening with a hard-fought 5-4 victory over Bracknell Bees, whilst Swindon had beaten third-placed Peterborough Phantoms 6-4 at home.  Tigers had won both previous meetings between the teams this season, a penalty shoot out victory at home and a fantastic 5-3 win on the road.

Both teams found it difficult to get their passing going in the opening five minutes of the game, with the puck not finding the stick and neither team playing particularly well. Tigers struck first with a goal out of nothing. Ollie Lord’s shot from the blue line was tipped by Jason Silverthorn between the legs of Marr and into the net to give Tigers the lead.  Swindon hit back within a minute, Tyler VanKleef scoring with a shot from the left circle which snuck past Day. Referees Matthews and Rose drew the ire of the Telford fans when they refused to call a clear boarding infraction – Corey Goodison was sent into the boards but neither referee gave a penalty. Tigers’ fans were even more enraged shortly after when referee Rose called an interference penalty on Dominik Florian, gifting Swindon a power-play opportunity. Swindon took full advantage of the extra player and Tom Rutkis tipped Aaron Nell’s shot past Day to give Swindon a 2-1 lead.

Tigers finally got a power play after Luc Johnson was called for tripping. However, as the power play was ending, Tigers got caught out on the Swindon blue line, allowing a Swindon break away which VanKleef finished off to give Swindon a 3-1 lead.

Tigers were not at their fluid best but would have time for one final rush up the ice as the period entered the final 10 seconds. Silverthorn passed to Florian who sent a shot in on goal which Marr saved, Florian managed to get to the puck before the period ended and flicked it over Marr to give Tigers a second goal with one second of the period left.

Tigers came out for the 2nd period and were given a glorious chance to get back level. Swindon’s Sam Bullas was called for hooking, closely followed by Nell, giving Tigers a 5-on-3 power play. As the first penalty was about to expire the puck broke to Brandon Whistle in the right circle, Whistle hit a superb shot into the roof of the net to draw Tigers level at 3-3.

Having just got back into the game, some poor defending cost Tigers dear. Corey Goodison turned the puck over on the Swindon blue line, allowing VanKleef a breakaway. The Swindon forward expertly beat Day with a perfect shot to complete his hat trick and put Swindon back in front. Things got worse shortly after when Tigers defender Thomas McKinnon tried to clear the puck from the side of the Tigers’ goal but ended up hitting it off Day and into the net. Nell was given credit for the goal as the last Swindon player to touch the puck, giving Swindon a deserved 5-3 lead. At this stage, it was all Swindon and Tigers were reeling. But for a magnificent save from Day, the deficit would have been more. The Tigers’ netminder threw himself across the goal crease to block a shot from Tomasz Malasinski when the Swindon forward had an open goal to aim for.

Tigers looked out on their feet, but a remarkable few minutes was sparked by Andy McKinney drawing a penalty from Stephen Whitfield that gave Tigers a much-needed power play. Just nine seconds into the power play, McKinney hit a weak shot that caught out Marr, the puck trickled through his legs and into the net to reduce the deficit to 5-4.  Tigers then drew level, just twelve seconds later. A poor pass by Nell gifted the puck to Adam Taylor ten feet from the goal, Taylor made no mistake with a cool finish over Marr’s glove to draw Tigers level at 5-5.

With momentum firmly swinging towards Tigers, Swindon lost their poise. Johnson was given a tripping penalty, followed by Tyler Plews for slashing. On the subsequent power play, Tigers took the lead. Whistle scoring with an exquisite shot into the top corner of the goal, giving Marr no chance.  Johnson then went back to the penalty box for tripping. Tigers needed just ten seconds of the power play to increase their lead. Silverthorn scoring from close range after a goalmouth scramble. Remarkably, Tigers had gone from 5-3 down to 7-5 ahead in less than four minutes.

Tigers came out for the 3rd period with a clear plan to avoid giving away any further odd-man breakaways and to maintain possession where possible. Swindon always threatened on the break and after an ill-advised interference penalty by Andy McKinney, Swindon drew themselves within a goal of Tigers’ lead. Tom Rutkis scored from close range to make it 7-6.

Nerves were jangling in the crowd as the game entered the final stage and Swindon broke in on goal but a fantastic block by Ollie Lord prevented Nell from getting a shot away.

Swindon pulled Marr from the goal to give them an extra attacker for the final forty-five seconds of the game. Swindon had possession in the Tigers’ defensive zone but Florian managed to get the puck and hit a backhanded shot from the blue line into the empty Swindon goal to seal the victory. Tigers’ win gives them another four-point weekend and sends them five points clear of Swindon at the top of the table, having played one game more.

After the game Head Coach, Tom Watkins commented, “It’s been a great weekend, certainly a rollercoaster and a mix of emotions at times but we got two great results at home in front of our fans. I keep talking about the character of this team but again that character and commitment dug us out of a hole tonight. The little things count, competitive sport is about fine margins and games like tonight where the players are prepared to sacrifice their bodies, blocking shots, diving to intercept pucks is a huge reason we are where we are.

Tonight’s win gives us a 3-0 record against the second-placed team in the league, that’s a big plus for us and in the shakeup, will give us an advantage. There is a very long way to go but we are nearly at the midpoint of the year. I can’t help but think these boys have overachieved even my own expectations, considering the number of injuries we have had over a 6 to 8 week period. The TEAM have got us into a great position.

I think it’s gone largely unnoticed but we’ve qualified for the National Cup Semi-Finals, in first place, this weekend which is another feather in the cap for this group.

I’d really love to see the local area get behind this team more and pack the rink out every week. They certainly deserve it thus far.”

Hexagon Telford Tigers 1 will next be in action at home on Saturday 21st, December against Hull Pirates and Swindon Wildcats. Match Night tickets available to purchase here!