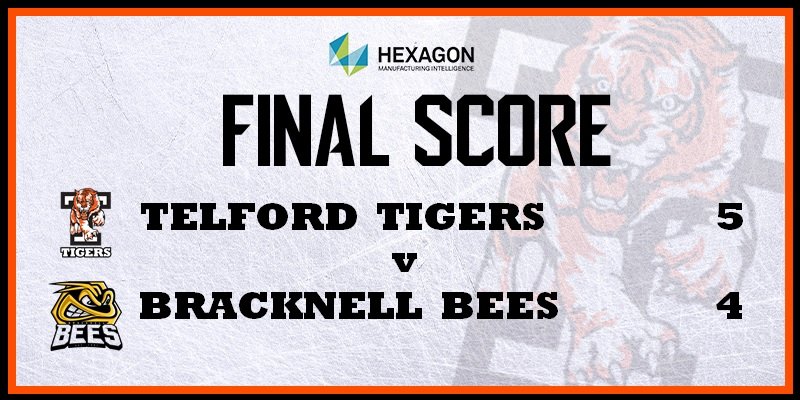 Tigers See Off Bee Attack. Hexagon Telford Tigers played the first of back-to-back home games this weekend against Bracknell Bees. Tigers sat top of the table going into the clash with the side from Berkshire, who visited Telford for the first time this season. Tigers had lost 4-3 in overtime in Bracknell when the two teams had previously met.

Tigers had a full roster available for the game with the exception of Jonathan Weaver and James Smith.

In goal for Tigers was Brad Day with Adam Goss in goal for Bracknell.

The 1st period was a fast-paced one with barely any stoppages of play. Bracknell scored the opening goal of the contest in the 3rd minute. Tigers looked liked they had cleared any danger after a Bracknell attack had broken down and the puck was in the possession of a Tigers’ defender in front of goal, but Calum Robertson stole the puck and tapped it into the net before Day could react.  Scott McKenzie went close with a good opportunity when free in front of goal, but Goss managed to save the puck with his pads. Tigers got on the scoresheet in the 10th minute, when Andy McKinney and Ollie Lord cycled the puck to Ross Kennedy on the blue line. Kennedy hit an unstoppable slap shot past Goss to draw the sides level.

Bracknell’s Josh Smith then forced a good glove save from Day after being sent clear.

As the period ended, Tigers had one final chance to take the lead. McKenzie lost his balance as the puck came to him in front of goal yet he still managed to get a shot away, although it went too high to trouble Goss.

The 2nd period was just a minute old when Tigers took the lead for the first time. A great backcheck by Kennedy kept the puck in the Bracknell zone and allowed McKinney to gain possession of the puck, pass to Kennedy, who set up McKenzie to hammer the puck home from close range.

Day then pulled off a stunning save after Josh Martin was sent clear on a breakaway.

The save proved crucial as almost immediately after, Tigers scored a 3rd goal. Dominik Florian hitting a wrist shot low past Goss from the right circle. Bracknell responded with a 2nd goal in controversial fashion. Day saved a shot and as both teams tried to get to the rebound, Robertson appeared to kick the puck into the net. Referee Hands was in a perfect position to spot the infraction but awarded the goal, much to the home fans’ disgust. Tigers fired back a minute later with a 4th goal. Terrific one-touch passing between Jack Watkins and Fin Howells set up Brandon Whistle to tap the puck home from in front of goal. But, Bracknell scored their 3rd goal a minute later. Robertson led a 3-on-1 breakaway and passed to Dominik Gabaj who scored with ease.

The officials again drew the ire of the home supporters when all four of them missed a clear too many men infraction by Bracknell.

Tigers did not let the missed call get to them and added a 5th goal in the 34th minute.  Watkins sent Whistle clear with a superb pass, allowing Whistle to skate in on goal and bury a wrist shot past Goss.

Bracknell had the final say on the scoresheet in the period, adding a 4th goal with 3 minutes left. Day made a rare mistake, not freezing the puck and playing it straight to Gabaj who hit a shot over Day’s shoulder into the net.

In the opening seconds of the final period, Day made up for his error with a stunning reaction save from a Gabaj slap shot. Tigers had plenty of possession and, at times, peppered the Bracknell goal with shots but Goss was having a fine game.  Tigers defended well in the final period with Howells making two terrific diving blocks to keep the puck away from the net.

As the game entered the final two minutes, Bracknell pulled Goss from the goal to add an extra attacker. Tigers did well to run out the clock, with Watkins and McKinney keeping the puck pinned against the boards in the corner of the Bracknell defensive zone denying Bracknell possession. As the game ended, Florian’s shot towards the empty net was cleared off the line by Harvey Stead.

Tigers’ win maintains their 3 point lead over 2nd placed Swindon Wildcats ahead of the clash between the two teams on Sunday night in Telford.

After the game Head Coach, Tom Watkins commented, “It was a tough game tonight, not our strongest performance defensively and I thought we were slow to move pucks through our zone. We created quality chances, scored some good goals and got ourselves in a position to kill the game off but didn’t have the ability or know-how to shut the door on Bracknell. Despite getting a two-goal advantage twice, the Bees equalised relatively quickly each time to keep the lead to 1 goal. That ability to lock up the back end and shut teams down has to improve, it’s something that we have to buy into as a team and forget individual points hauls over the team points. It’s about having the right attitude and commitment, just look at Fin Howles tonight, he was the best player on the ice, the kid played a really solid all-round game and made some great decisions. I’m very proud of him.

Hexagon Telford Tigers 1 will next be in action at home on Saturday 21st, December against Hull Pirates and Swindon Wildcats. Match Night tickets available to purchase here!