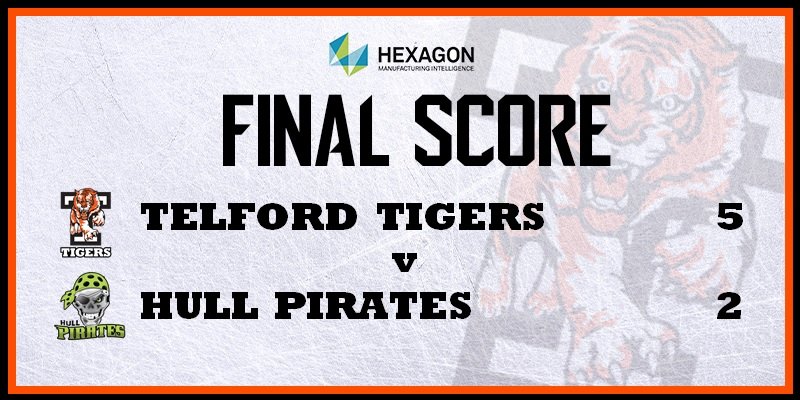 Tigers Win to take Christmas Number One. Hexagon Telford Tigers faced off against Hull Pirates on Saturday night at Telford Ice Rink, holding a five-point lead at the top of the table. Second-placed Swindon Wildcats lost to Sheffield Steeldogs the previous evening, with that game representing the game in hand on Telford that Swindon held.

Tigers were again without Jonathan Weaver, who was joined on the sidelines by Brandon Whistle, but Tigers were able to add James Smith to the lineup.

Early in the period, Tigers peppered the Hull goal with shots. Dominik Florian’s shot was saved by Smith and Jason Silverthorn battled for the rebound but Smith cleared. Hull’s first genuine attempt at goal saw them take the lead. A long-range shot from Jonathan Kirk went straight into the top left-hand corner of the net, with Day clearly unsighted as the netminder didn’t move.

Silverthorn was gifted the puck by a Hull defender 10 feet from the goal but the Tigers’ captain was so surprised to be presented the puck, he rushed his shot and the puck rose over the goal. Andy McKinney was next to pass up a good goalscoring chance, his shot going wide of the goal when well placed.

Tigers pressed forward and came even closer when Ricky Plant’s shot was deflected by Silverthorn onto the post but bounced to safety and was cleared. Tigers ended a frustrating period a goal behind and with work to do.

Early in the second period, McKinney broke in on goal but Smith caught his shot in his glove.

Tigers have had cause to question the officiating at times this season and another incident had the home fans deriding the decisions of referees Hamilton and Jarvie. Hull’s Lee Bonner caught Ollie Lord with a bad hit, cross-checking him into the boards with force. Bonner escaped with a 2-minute penalty when his infraction should have seen him ejected from the game. Lord was stretchered off the ice after receiving treatment and did not return to the game.

McKinney took exception to the hit but Bonner would not drop the gloves leaving it up to Jordan Fisher to answer for him. McKinney and Fisher both received fighting penalties.

Tigers were getting plenty of shots at Smith and had numerous rebounds but could not get to the puck first.

In the 33rd minute, Hull’s Kevin Phillips caught McKinney with a high stick and was sent to the penalty box. On the subsequent power play, McKinney got his revenge with Tigers’ first goal of the evening. Corey Goodison found McKinney in space in the right circle, McKinney hammered a shot in off the bar to draw the sides level.

After the goal, Smith skated to the bench to get some repairs to his pads and delayed the restart by a couple of minutes. The delay seemed to fire up Telford who took the lead almost immediately after the restart. Florian skated from his own blue line into the Hull zone and hit an unstoppable shot past Smith to put Tigers in front 2-1.

A minute later, Tigers had a third goal and fully deserved the lead. Plant sent Florian clear on a 2-on-1 breakaway with Silverthorn. Florian timed his pass perfectly and Silverthorn applied the finish with a wrist shot into the top corner giving Smith no chance.

Tigers ended the period very much on top in the game and on the scoreboard.

The third period was five minutes old when Tigers added a fourth goal. Terrific work by Fin Howells kept the puck in the Hull zone and the young Tigers’ forward made a fantastic reverse pass to Dan Mitchell in front of goal. Mitchell beat Smith with a low shot to put Tigers 4-1 ahead.

Shortly after, Bonner was assessed a tripping penalty. On the power play, Tigers scored a terrific team goal. Plant and Silverthorn exchanged passes and set up Scott McKenzie to score with a one-time wrist shot from close range to put Tigers 5-1 ahead.

Tigers would spend the final five minutes of the game killing off penalties as Florian was given two separate 2-minute penalties for cross-checking and abuse of an official. Hewitt, whilst still serving his initial penalty, was assessed a second abuse of official penalty whilst in the penalty box and was ejected from the game. McKinnon then caught David Norris with a high stick, drawing blood, which meant an automatic game misconduct penalty and a 5-minute power play for Hull. Tigers were down to 3 players and managed to keep Hull out until the 59th minute when Kirk scored his second of the game. Tigers saw out the rest of the game and increased their lead at the top of the table to 7 points ahead of their clash with Sheffield Steeldogs.

After the game Head Coach, Tom Watkins commented, “What a night, great crowd, good atmosphere, solid performance by the team on the ice in a game that had everything any fan could ask for. Also, a great job off the ice by our match night volunteers who do a tremendous job for the club week in, week out and then a festive skate with the fans/players. I’m a very pleased coach and General Manager tonight. On the ice we were superb, we moved the puck very well, our transition was very slick and fast, defensively as good as any night this season and I thought our attitude to our penalty kill late in the game, despite having a 4 goal cushion, was first class. Blocked shot after blocked shot, we showed a great attitude. Andy McKinney got us going with a fight and a goal not long after. Then, we quickly capitalised on our chances and ended the period with a 3-1 advantage. All round a solid effort tonight.”

Hexagon Telford Tigers 1 will next be in action at home on Sunday 29th, December against Milton Keynes Lightning. Match Night tickets available to purchase here!