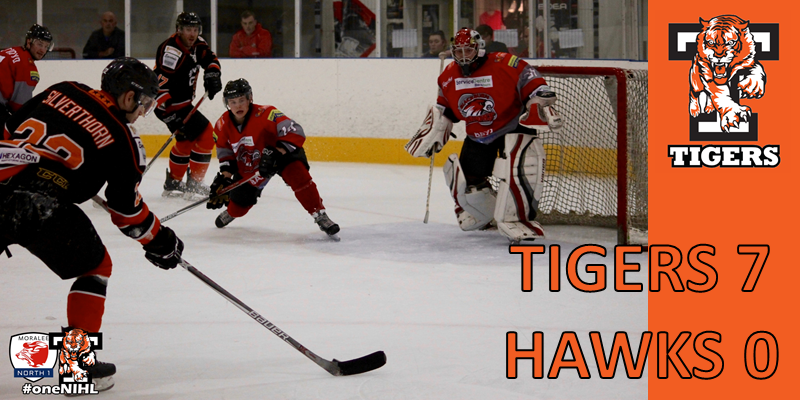 Telford Tigers 1 entertained Blackburn Hawks at Telford Ice Rink on Saturday night. Tigers went into the game looking to continue their excellent league form this season and maintain the top spot in the division. Jonathan Weaver was again missing through suspension and Tigers were also without Jack Watkins, Joe Miller and Dale White. Finnish import defender Kim Miettinen iced for the first time since joining the club earlier this week.

The first period was a scrappy affair, with both teams struggling to settle into the game. Early on, the teams exchanged penalties, with net minder Dennis Bell making a good stick save whilst Tigers were shorthanded, to keep the sides level.  Tigers had to adjust the lines due to the missing players and were not at their fluid best, but took the lead in the 15th minute when Danny Rose’s blue line shot found its way past the Blackburn net minder. Tigers, having found their feet, scored the second just 40 seconds later after terrific work by Ricky Plant who glided past the Blackburn defence and set up Captain Jason Silverthorn in front of the goal. Silverthorn made no mistake with a perfect wrist shot into the top right hand corner to give the Tigers a two goal lead at the end of the period.

The second period was only 22 seconds old when Tigers added a 3rd goal, Ricky Plant scoring with a wrist shot from a pass by Tom Watkins. Exactly 10 minutes later, Tigers got their 4th of the night. James Smith scoring from close range after a pass from behind the goal by Warren Tait.  Tigers were in full flow and added a 5th goal in the 34th minute, Silverthorn getting his second of the night from Plant’s pass whilst Tigers were on the power play. A 6th goal arrived shortly after,  Smith scoring his second, expertly back handing the puck over the net minder’s shoulder into the goal after being put clear by Plant’s perfect pass. Plant getting his 3rd assist of the night and 4th point. In the final minute of the period, Tigers had a goal ruled out by referee Boardman, who judged that Watkins had played the puck with a high stick.  Tigers ending the period dominant, with a 6 goal lead.

The final period saw only 1 goal, scored by Silverthorn in the 54th minute. Silverthorn completing his hat trick with a shot from close range on the rebound, after his first shot had been saved.  As the game came to its conclusion, Bell made a terrific pad save in the last few seconds to ensure he gained a shut out.

After the game player coach Tom Watkins said, “ I thought tonight was a really solid performance and result. Despite being short benched, we dominated the game.  Watkins added, “ We lost Jack (Watkins) during the warm up and it was great to see James Smith step in and get a couple of goals, he showed he’s still got it!”