Tigers End Year on a High. 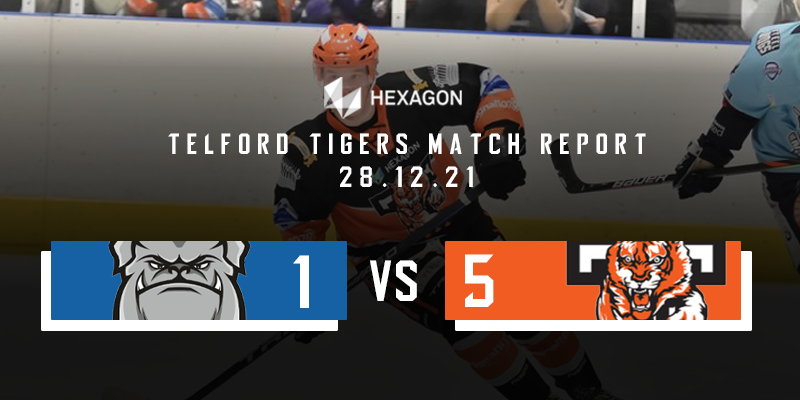 Tigers End Year on a High. Hexagon Telford Tigers travelled to Ice Sheffield for their final game of 2021 after a thrilling overtime victory over Leeds Knights the previous evening. Tigers had been able to add Jack Hopkins back to the lineup after missing the Leeds game but were still without Jack Watkins, Ricky Plant, Andy McKinney and Nick Oliver.

Sheffield were also still struggling for numbers as well with several regulars missing from their line up but they had seen a number of key players return to the ice for this game.

Sheffield went close when Sam Towner’s rising shot hit the crossbar with Brad Day beaten.  In the last minute of the period, Tigers were gifted a power play when Sheffield’s Jason Hewitt was called for an unnecessary tripping penalty. With Tigers forcing a scramble in front of goal, Zimozdra saved a Joe Aston shot and the puck broke to the slot with seconds of the period left. Luka was on hand to smash the puck into the net a split second before the buzzer sounded for the end of the period. The referees, Wells and Good conferred and agreed the puck had crossed the line before the buzzer sounded and awarded the goal to give Tigers a commanding three-goal lead at the break.

The second period was much closer and Tigers would end up rueing the amount of missed chances. Austin Mitchell-King had two glorious chances but shot straight at Zimozdra both times. Luka and McKenzie had a breakaway which saw McKenzie’s shot saved. In the final minute of the period, Thomas McKinnon was given a very harsh slashing penalty, giving Steeldogs a power-play chance which they converted. Towner’s shot from close range hit Brad Day on the shoulder and dropped into the net with just three seconds of the period left, giving Sheffield a lifeline in the game.

Tigers made the perfect start to the third period by adding a fourth goal in the opening minute. With the ice surface causing some issues for both teams, McKenzie passed to Danny Rose who skated into the Steeldogs’ defensive zone and was unchallenged so kept going and let a shot go that went through Zimozdra and into the net. With a three-goal lead restored, Tigers were able to see out the period playing controlled hockey until a late penalty call went against Tigers. McKenzie was given a five-minute penalty for slashing meaning Tigers would play the final four minutes of the game on the penalty kill and a man down. Despite the numerical disadvantage, it was Tigers who scored the final goal of the game after Sheffield had pulled Zimozdra from the goal to add an extra attacker. Jason Silverthorn collected the puck behind the Sheffield goal and passed in front to Hopkins who buried a shot into the empty net to seal the game and the two points.

Tigers’ win and four-point weekend see them close the gap to leaders Swindon to two points heading into 2022.

After the game Head Coach Tom Watkins, commented, “It was a big win on the road for us in a tough building and I’m happy to finish 2021 with a couple of wins under our belt.

In the first period, we were solid and moved our feet well, but in the second period, we stepped off the gas a little. In the third we competed hard and made some big shot blocks with Brodie (Jesson), Sam (Watkins), Joe (Aston) and of course Jonathan Weaver, showing the character and desire to win.

Here’s to a strong 2022. I’d like to say a big thank you to all the fans and sponsors for supporting the team throughout 2021.”