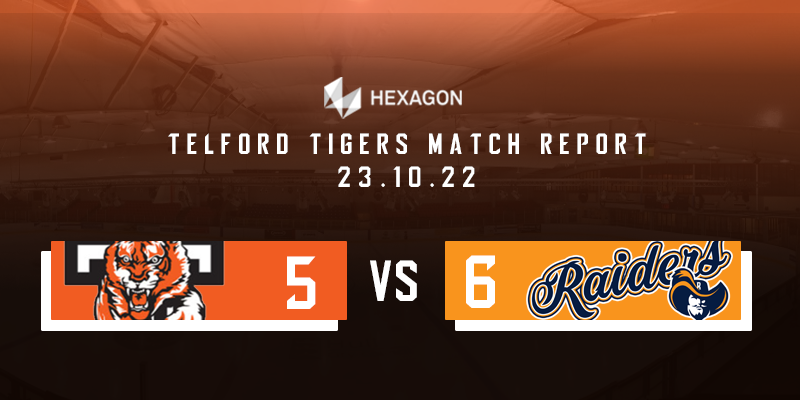 Tigers faced off against Raiders on the back of a terrific win on the road the previous evening – a 6-1 victory over Bristol Pitbulls. Telford were still without Jonathan Weaver, Jack Watkins and Deakan Fielder but saw Corey Goodison return to the line up after missing the previous game.

The opening period was a very close one with Raiders having more of the shots but Brad Day in the Tigers goal looked comfortable in dealing with everything thrown at him. One shot did get past him but was cleared off the line before Raiders could score.

The only goal of the first period was scored by Telford. Vladimir Luka found Fin Howells with a cross ice pass allowing Howells to break in on goal and shoot in off the post to open the scoring.

Tigers fell apart in the second period with Raiders out battling them for much of the twenty minutes. A sloppy start to the period saw Raiders draw level in the opening minute. A turnover on the boards led to Ashley Jackson shooting past Day to equalise.

Tigers regained the lead when Nick Oliver shot from distance and Scott McKenzie expertly deflected the puck past Brad Windebank in the Raiders’ goal.  But the lead was brief as Matthew Gomercic equalised for Raiders.

Jake Sylvester put Raiders ahead when another turnover led to Sylvester gaining the puck and his initial shot hit a defender but rebounded back to him to shoot past Day. Tommy Huggett then doubled the lead, tapping home a rebound from Sylvester’s shot. Telford then went further behind with a short handed goal. Thomas Relf was serving a slashing penalty for Raiders and another turnover went against Telford allowing Gomercic a break away which he finished with a low shot past Day for Raiders’ fifth goal.

Early in the third period the game looked over when Huggett scored his second of the game to put Raiders four goals ahead.

Tigers hit back almost immediately when Howells scored his second of the night with a superb deflection of Oliver’s shot. With the game entering the final five minutes, Telford pushed hard for the goals they needed. Sam Watkins was able to scramble the puck home from close range to reduce the deficit further and with two minutes left Day was pulled from the goal to add an extra attacker. The man advantage worked as McKenzie found Howells low down and the Tigers’ forward completed his hat trick with a low shot past Windebank.

A delay of game penalty against Raiders’ Aaron Connolly gave Tigers one final chance in the dying seconds of the game but despite the numerical advantage they could not score and fell to a narrow defeat.

After the game Head Coach Tom Watkins, commented, “A disappointing middle period cost us the game, we made some poor decisions, we didn’t win enough of the key battles and we could have been down 8-1 or more after giving up grade A scoring chances all period. If it wasn’t for Brad Day, I’m sure we would have been. We can’t lose our way like that and when it’s tough we have stick together as a team and work better as a group to get out of those situations.

We had a strong third period but ultimately gave ourselves too much of a mountain to climb.”