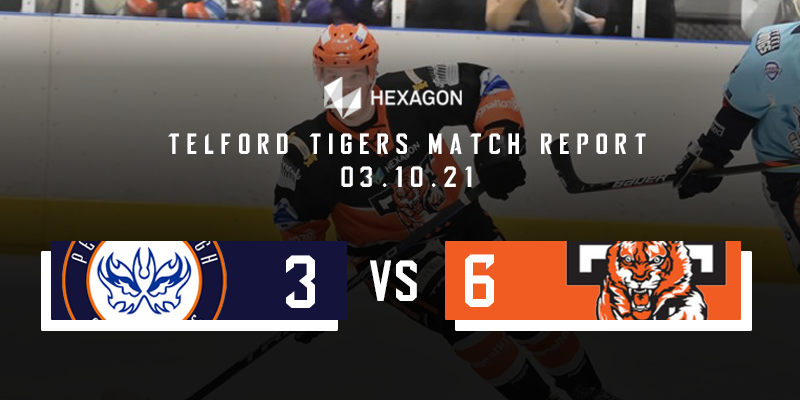 Tigers Hit Phantoms for Six. Hexagon Telford Tigers travelled to Peterborough to take on the Phantoms in a vital Autumn Cup game. Tigers’ defeat to Sheffield left the team outside the semi final qualification in 6th place and needing the two points from this game.

Tigers were back to full strength as Scott McKenzie returned to the line up after missing the defeat to Sheffield the previous evening.

Telford desperately needed to get back to winning ways and had a disastrous start to the game. Thomas McKinnon was given an interference penalty in the second minute and Peterborough opened the scoring. Jordan Lawday in the Tigers’ goal had made a save and was still down on the ice and before he could regain his position, Nathan Pollard shot the puck past him to give the Phantoms the lead. Tigers then had an extended 5-on-3 power play after Pollard and Will Weldon were given penalties. Despite the numerical advantage, Tigers barely created a chance and wasted the opportunity.

Peterborough soon extended their lead with a goal from Glenn Billing. Ales Padelek passing from behind the goal to the unmarked Billing who fired home.

Tigers had been lethargic up to this point but conceding the second goal spurred the team into life. Tigers scored a scrambled goal to get on the score sheet. Jack Watkins forced a save from Phantoms’ net minder Jordan Marr, Jack Hopkins’ shot was then saved by Marr but Howells was on hand to force the puck over the line. Tigers equalised shortly after. McKenzie made a terrific pass to find the unmarked Sam Watkins in the slot. Watkins skated in on goal and hit a wrist into the top left hand corner of the goal to draw the sides level.

Tigers almost took the lead late in the period. Jason Silverthorn hitting the inside of the post with a shot that even the Tigers’ forward thought had gone in as he turned to celebrate but the puck had bounced out. Tigers finished the period on top but level on the scoreboard.

Tigers dominated the second period and took the lead in the 23rd minute. McKenzie passing from behind the goal to Austin Mitchell-King who sent a wrist shot low along the ice past Marr. A fourth goal was scored shortly after, Mitchell-King’s initial wrap around shot was saved by Marr but Silverthorn reacted first, smashing home the rebound. Tigers took full control of the game with 5 minutes of the period left. Jonathan Weaver jumped off the bench and skated into position and saw the puck land perfectly for him to hammer a slap shot high to Marr’s right to give Tigers a 5-2 lead.

Tigers tried to run out the clock in the third period and controlled much of the play. But, Peterborough managed to get a goal back 8 minutes from the end. Poor defending allowed Peterborough a 2-on-1 breakaway which Padelek scored from, getting the Phantoms back within two goals of Tigers’ lead. But, Tigers kept Peterborough from scoring any further goals and added an empty net goal with just five seconds of the game left. Andy McKinney winning the puck on the Phantoms’ blue line and skating to the goal crease to tap the puck home. Tigers win gets them back in the race for a semi-final place ahead of the final two group games next weekend.

After the game Head Coach Tom Watkins, commented, “It was good to pick up a win this evening after last night’s disappointing result. It’s always a tight game here and even with a lead I never felt Peterborough were out the game. They know how to play in this building and often score in bunches after getting a first they tend to grab a lot of momentum. I thought we were unplayable in the second period, we moved the puck very well and dominated the period. It was also good to see some different names on the scoresheet tonight.”