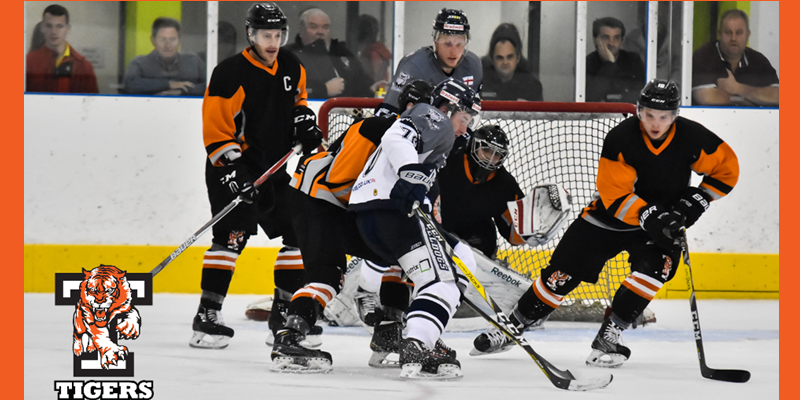 Telford Tigers 1 opened their NIHL season with a home game against one of last year’s EPL rivals, Sheffield Steeldogs.  Tigers welcomed back a number of returnees from last season’s championship team and a few new faces, including players stepping up from within the junior teams’ ranks.  The Steeldogs iced former Tigers’ favourite Milan Kolena as their second import.

Sheffield started strongly and opened the scoring in the second minute when Charlie Thompson beat Tigers’ net minder Dennis Bell with only the second shot of the game. Tigers equalised in the twelfth minute when Jack Watkins opened the Tigers’ account with a shot from inside the left circle which flew into the roof of the net. Tigers took a number of penalties during the period, but it was whilst at even strength, that Sheffield took the lead again. James Spurr scoring to give the Steeldogs the lead at the end of the first period.

The second period saw an early chance for Tigers to equalise when Macauley Halford had a breakaway chance which was well saved by Zimozdra in the Sheffield net. Tigers did draw level in the twenty fifth minute with captain Jason Silverthorn scoring a wrap around goal after wrong footing Zimozdra. The scores stayed level until deep into the third period when Silverthorn scored his second of the night, deflecting in a Jonathan Weaver shot from the blue line to give Tigers’ their first lead of the night.  Just when Tigers thought they had wrapped up the win, a rarely called penalty would prove to be Tigers’ undoing. Ricky Plant and Jason Silverthorn were both thrown out of a face off for infringements, meaning that Joe Miller was required to serve a two minute penalty. Steeldogs took full advantage when Ben Morgan scored on the rebound from Spurr’s shot.  The game would go into overtime and despite a five minute sudden death period being end to end attacking from both teams, the game went to penalty shots.

Sheffield went first in the shoot out with Andrew Hirst scoring. Halford then missed his shot to give Sheffield the advantage. Kolena’s shot was then saved by Bell, Silverthorn responded with a goal for Tigers by putting the puck through Zimozdra’s legs.

With the shoot out tied at 1-1, Bell made a terrific glove save from Adrian Palak, giving Joe Miller the chance to win the game. Miller made no mistake with a cool shot after sending the Steeldogs’ net minder the wrong way.

Tigers start the season with a thrilling, well deserved victory.

Man of the Match – Adam Taylor.