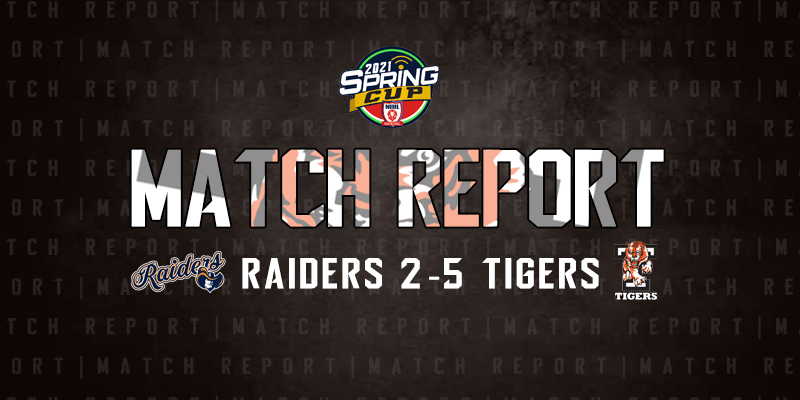 Tigers Late Show Seals Road Win. Hexagon Telford Tigers travelled to Romford for their first road game of the Spring Cup for the second of back to back games against the Raiders. Tigers had won a narrow 3-2 victory over their opponents on Saturday night and gave away far too many penalties, something they needed to address.

In goal for Tigers was Jordan Hedley making his Tigers’ debut with Ethan James in goal for Raiders.

Tigers and Hedley made a disastrous start as the defence was caught cold by Raiders’ Oliver Baldock who sent Jake Sylvester in on the Tigers’ goal. Sylvester’s shot went through Hedley and trickled over the line to hand the home team a goal lead after just thirty-four seconds.

Tigers responded well for the remainder of the period and penned Raiders in their own defensive zone but found James difficult to beat. Fin Howells and Kieran Brown both went close and a Jonathan Weaver slap shot hit the cross bar.

At the other end, Hedley had to react quickly to make a save from a dangerous break by Raiders’ Jacob Ranson.

Finally, with just over two minutes of the first period left, Tigers gained a well-deserved equaliser. Danny Rose found Sam Watkins in space by the Raiders’ blue line and he, in turn, sent the puck to Joe Aston who used his speed to lose the Raiders’ defense and hit a brilliant wrist shot into the left-hand corner of James’ goal.

The second period was very similar to the previous game between the two teams with both sides taking numerous penalties. First, the Raiders had a 5 on 3 power play after Ross Venus and Danny Rose took penalties within fifteen seconds of each other. Raiders went close on two occasions during the power play. Harry Gulliver’s rising wrist shot was saved brilliantly by Hedley and Juraj Huska shot over when well positioned.

The tigers killed the penalty and then had their own 5 on 3 power play but the Raiders defended well and reduced the Tigers’ power-play unit to long-range shots which didn’t trouble James.

The period ended with the teams still level and it all to play for in the third period.

It was the Raiders who took the lead early in the period with Sean Barry finishing off a rebound from an Aaron Connolly shot after the Tigers failed to clear the puck from their zone.

The Tigers responded brilliantly to going behind by scoring two quick goals to draw level and then take their first lead of the game. First, Venus scored when Scott McKenzie led an odd-man rush, drove the net and opened space for Robert Lachowicz to find the unmarked Venus who shot past James. This was closely followed by a goal from Sam Jones who hit a terrific shot, beating James over his glove into the top corner of the goal.

Tigers thought they had scored a fourth shortly after when Venus skated in on goal, shot and saw James save but fall into his goal with the puck. Referees Belfitt and Sevruk conferred before washing out the goal and awarding an interference penalty to Venus much to the surprise of the Tigers’ bench.

But the team did not have to wait long for the fourth goal as Tigers’ class began to make the difference. Venus carried the puck into the Raiders’ zone and timed a superb pass to Lachowicz who was left with an open net to tap the puck into for his first Tigers’ goal.

As the game reached the final five minutes, the Tigers were once again faced with killing off a 5 on 3 power play. Cole Shudra was called for kneeing closely followed by Rose for boarding, a penalty which also meant that Rose was given 10-minute misconduct and with less than ten minutes of the game to play, he was ejected from the game.

Raiders called a time out and when they returned they pulled James from their goal to give them a 6 on 3 power play. Despite this huge numerical advantage, it would be the Tigers that would score whilst shorthanded. Jason Silverthorn won the puck in his own zone and sent it down the ice to clear it but also chased the puck into the corner. Initially, it looked likely to run some time off the clock but he outbattled the two Raiders’ defenders and skated towards the goal, tapping the puck into the empty net for the Tigers’ fifth goal and sealing a hard-fought victory.

The win gives the Tigers a four-point weekend and gives them a great start to the competition ahead of next weekend’s back to back games against Bracknell Bees.

Man of the match: Ross Venus.

After the game Head Coach Tom Watkins commented, “I thought tonight was a much better performance from the team. I changed the top two units to give us a bit more speed across both lines and we looked much more comfortable. In the first period we created a lot of good chances but Ethan James in the Raiders’ goal was very solid. We showed good transition on our first goal and likewise on a couple more of our goals. We were strong on the penalty kill again and we had another strong net minding performance with Jordan Hedley.

I’m very pleased with the weekend overall. The team battled hard, played for each other which is key but we were all left scratching our heads at the officiating tonight with several very bizarre calls not least the call on Ross Venus when he scored a goal but then received a two minute penalty and the goal was disallowed.”