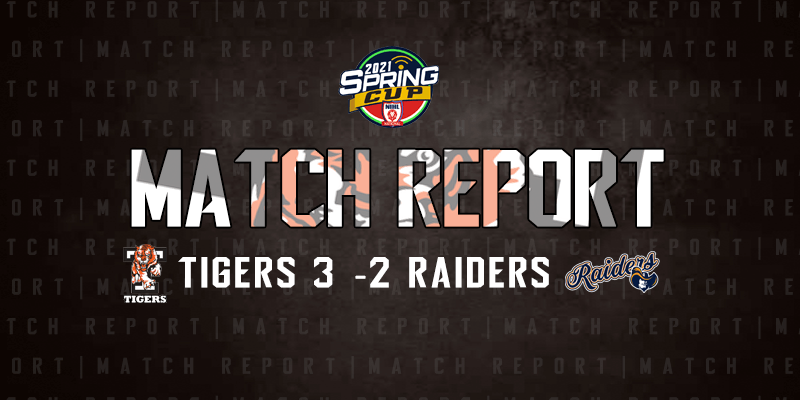 Tigers Spring into Action. There was an air of similarity about the opening game of the Spring Cup at Telford Ice Rink as Hexagon Telford Tigers started their Spring Cup campaign at home against Raiders on Saturday night. The previous game held at the rink was almost incomprehensibly 11 months ago when the Tigers ended their 2019-20 league campaign with a 7-3 victory over Raiders which confirmed the Tigers as league champions.

With the Spring Cup being played behind closed doors and streamed live for fans to watch, the rink was empty.

With cup favourites Sheffield Steeldogs having made a winning start with back to back victories against Swindon Wildcats last weekend, it was vital that Tigers started with a victory.

In goal for Tigers was Brad Day with Ethan James in goal for Raiders.

Not surprisingly, both teams were rusty in the first period with the Tigers missing a glorious chance after just 15 seconds. Calvert was unmarked in front of the goal but shot straight at James.

Tigers had two early power-play opportunities but, with the power-play unit a work in progress after such limited training time, it was Raiders who went closest with a breakaway chance for Glen Billing which was well saved by Day. Tigers cashed in on their third power play of the period soon after and opened their account for the season. Scott McKenzie found the unmarked Shudra in front of the goal allowing Shudra to send a backhanded wrist shot over the pads of James and into the net.

A late Brown kneeing penalty meant that the Tigers would start the second period shorthanded but a good solid penalty kill to open the period saw the Tigers maintain their lead.

Early in the second period, the Tigers added a second goal. Clement sent a speculative shot from the blue line in on goal hoping for a deflection but with James screened by a Tigers’ forward he reacted late to the shot and, despite getting his glove to the puck, he could not stop it going into the net.

Raiders fired back with a power-play goal after Jones was called for a cross-check. Harry Gulliver halved the deficit with a shot into the right-hand corner of the goal after being set up by Dan Scott.

The Tigers responded within two minutes to regain their two-goal lead. Jason Silverthorn fought to win the puck on the Raiders’ blue line and passed to Calvert behind the goal. Calvert slid the puck to Brown who hammered a first time shot into the top right-hand corner of James’ goal.

Once again, Tigers ended the period giving away a needless penalty when Dan Mitchell was called for hooking.

Tigers killed off the penalty but the third period proved to be a scrappy one with Tigers’ players taking numerous trips to the penalty box. Mitchell-King received a 5-minute penalty for boarding which saw him ejected from the game. Raiders threw everything at the Tigers’ goal but Day stood tall and made a number of terrific saves. As the penalty expired, Raiders scored through Billing from close range.

A further Tigers penalty was called (Ricky Plant for holding) which gave Raiders another chance to draw level. Erik Piatak went close when his wrist shot rang off the post but the Tigers cleared the puck before Raiders could score with the rebound.

A frantic final minute saw Raiders pull James from the goal to add an extra attacker but some resolute defending kept the puck away from the goal and allowed the Tigers to record their first victory in the competition.

Man of the match: David Clements.

After the game Head Coach, Tom Watkins commented, “I’m pleased to get that one under our belts. It was great to be back on the ice and I can’t fault the work ethic or commitment from either team. The Raiders never quit, they kept working which gave us a nervy finish. They put us under a lot of pressure after we ran into minor penalty after minor penalty then a 5-minute major penalty. We took a lot of penalties which was frustrating but equally, by that token, I thought our penalty kill was excellent. Brad Day was a huge part of that, he played really solid like he’d never had a break. We never got into the groove and weren’t able to roll lines the way we hoped but there were glimpses of what we can do.  It is still very early days, we are integrating a lot of new players and in a very different environment from what we are used to. A win is a win and we are looking forward to getting on the road tomorrow for our next game.”

Watch out for further details about the Spring Cup fixtures, scores and live streaming of games at Telford Tigers, visit: https://www.telfordtigers.net/news or catch up on Facebook or Twitter.