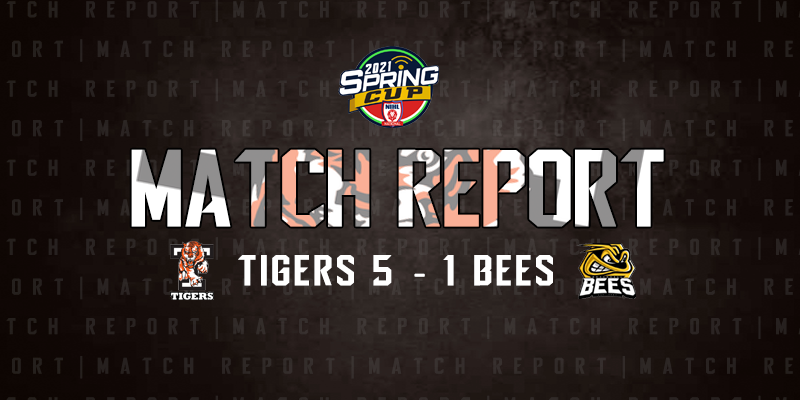 Tigers Maintain Winning Run – Hexagon Telford Tigers took on Bracknell Bees at Telford Ice Rink on Saturday afternoon with the latest game of the Spring Cup competition. Tigers would face the Bees twice over the weekend with the reverse fixture the next day in Slough, the new home of the Bees.

Tigers came into the game with back to back wins over Raiders with Tigers shaking off the rust of not playing for 11 months by winning 3-2 at home and 5-2 on the road. The key point that the Tigers would need to rectify from the previous games was the 75 minutes of penalties that the team had picked up over the first two games.

Tigers had a full roster available with the exception of Corey Goodison.

Brad Day started in goal for Telford with Adam Goss in the Bracknell net.

Both teams made a bright start with the first chance of the game falling to Bracknell’s Lewis Hook but his shot from close range was well wide. The game was physical with both teams looking to get hits in early. Tigers were in charge for most of the first five minutes with Joe Aston, Scot McKenzie and Sam Watkins all getting shots in on goal but Goss was equal to them.

Ross Venus and Robert Lachowicz combined well on a number of occasions and looked threatening whenever they were on the puck.

Midway through the first period, the Tigers made the breakthrough and opened the scoring. McKenzie sent Cole Shudra into the Bracknell zone and Shudra weaved his way towards goal and shot from a tight angle beating Goss low down to put Tigers ahead. Shortly after, Kieron Brown’s wrist shot hit the crossbar and bounced out of play.

Bracknell pushed for the equaliser and a shot from Deakan Fielder hit the post and Day was called upon to make a couple of saves but the Tigers’ defence worked well and maintained the Tigers’ lead at the end of the period.

Tigers started the second period with a power-play after James Galazzi was called for a late hit but Tigers’ long-range shots were easily saved by Goss.  As the game became more scrappy, Bees got level on the score sheet with a short-handed goal. Fielder was sent to the penalty box for tripping giving the Tigers a power play but some sloppy play in the Tigers’ defensive zone allowed Hook to find Harvey Stead unmarked in front of goal and Stead’s wrist shot beat Day low down to draw the sides level at 1-1.

The period ended with both teams looking to make their hits count and the game started to get feisty with Bracknell’s Josh Martin lucky to escape a penalty after the buzzer had sounded.

The Tigers dominated the final period and took the lead after five minutes with a neat passing play. Jason Silverthorn sent Ross Venus in on goal but instead of shooting, he passed to Ricky Plant who slid the puck past Goss to restore the Tigers’ lead. Less than a minute later, the Tigers added a third goal. Lachowicz drove towards the net and slipped a perfectly timed pass to McKenzie who shot into the open net to put Tigers 3-1 ahead. This goal clearly deflated the Bees’ team and a fourth goal killed the contest off. A brilliant offensive rush by Sam Jones allowed the defender to shoot for a rebound off Goss and leave Silverthorn a tap in from close range.

Tigers gave away only one penalty during the game – a hooking call on Plant – and from the resultant power play Bracknell should have scored. Somehow Bobby Chamberlain shot wide when presented with an open goal. The Tigers would have the last say on the score sheet with Jones getting a deserved goal in the final minute of the contest. A scramble in front of Goss saw the puck slammed in by Jones from almost in the goal crease to seal a 5-1 win for Tigers and maintain their 100% record in the competition.

Man of the match: Nick Oliver.

After the game Head Coach, Tom Watkins commented, “It was another pleasing win with lots of positives. Defensively, I thought we were solid, didn’t give up any odd-man rushes and managed to stay out of the penalty box. We were on our game for 50 minutes but for the second half of the second period, we lost our intensity after they tied it up. The power play isn’t clicking at the moment and we need to keep it simple and be more direct until we become more familiar with one another. Our 3rd/4th line players really played at a good level today and we’re confident going head to head with the Bees’ top unit. It was a good display all round.”