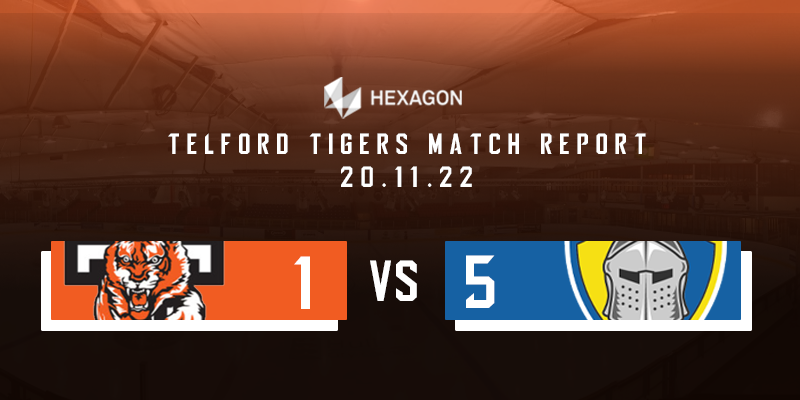 The first period went by quickly with hardly any stoppages. Leeds broke with speed on numerous occasions, but Tigers defended well despite losing Corey Goodison for a few minutes after the Tigers’ defender was caught off the puck with a high stick. Goodison returned to action and Tigers scored the only goal of the opening period. Matt Haywood was serving a hooking penalty for Leeds, giving Telford a power play. Telford took full advantage of the extra attacker when Ricky Plant and Fin Howells combined to set up Jason Silverthorn to hammer a first time shot past Sam Gospel.

Tigers made a poor start to what would be a disappointing second period. Within the opening thirty seconds, Cole Shudra scored for Leeds to level the scores.

Defensively, Tigers were left wanting all through the period and Shudra scored five minutes later after a turnover by Tom Byrne in the Leeds defensive zone led to a breakaway by Kieran Brown, allowing the Leeds forward to set up the unmarked Shudra for his and Leeds’ second goal.

Shortly after, another turnover by Tigers gifted a goal to Leeds. Danny Rose played an ill-advised pass straight to Brown who went clean through on goal. Brown’s shot went over the goal, but the puck bounced off the back boards and landed perfectly for Shudra to tap into the open goal for his hat trick.

Leeds then added two further goals in quick succession. Brown scored Leeds’ fourth with a tap in from a rebound and then Zach Brooks shot in off the bar for Leeds’ fifth goal, sending Tigers into the break reeling.

Tigers improved in the third period, but Gospel in the Leeds goal was in fine form and despite some late pressure with back-to-back power plays, Telford could not add to their tally and fell to a disappointing defeat.

Man of the match: Ross Kennedy.

After the game Head Coach Tom Watkins, commented, “It was a disappointing second period that cost us the game. We made some mistakes against a team that are very clinical and punished those mistakes. We were unfortunate on the first goal after it took a deflection off one of our players’ shin pads and then two turnovers led to goals, and we were puck watching in our defensive zone. I’m pleased with our commitment and desire to compete, and we got a great result on Saturday, it was just a shame we couldn’t back that up on Sunday. I appreciate the help of Jared, Ross and Andy. All three are quality players and we are grateful to them for playing for us this weekend.”