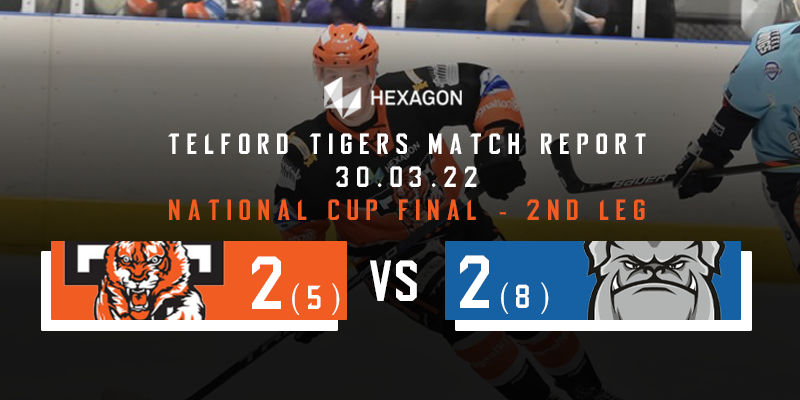 Tigers Lose Cup Final. Hexagon Telford Tigers played the second leg of the National Cup Final on Wednesday evening. Telford lost the first leg in Sheffield 6-3 in a very disappointing performance and had to turn around the three goal deficit to retain the cup they won last season, and repeat the double.

Tigers were without Ross Connolly, Austin Mitchell-King and Jack Hopkins who was playing for Great Britain U18s.

Telford had beaten Sheffield in the previous league game between the sides in what became a fractious contest.

The game proved to be fast paced from the first whistle but neither team got many shots on goal in the first period. Sheffield opened the scoring in the twelfth minute with a goal from Jason Hewitt after Tigers’ defence had turned over the puck in their own defensive zone, gifting Hewitt a free shot at goal which he buried low past Brad Day to give Sheffield the lead and a four goal aggregate lead. Telford battled back and the crowd were delighted to see Andy McKinney hit Lee Haywood with a perfect check, knocking him to the ice. As the first period was entering the final minute, Telford hit back with an equalising goal. Scott McKenzie battled to win the puck behind the Sheffield goal line and sent the puck in front for McKinney to score from close range.

Early in the second period, Alex Graham for Sheffield had a breakaway but Day pulled off a brilliant save. The save proved even more crucial moments late as Tigers broke in on the Sheffield goal, McKenzie used Bayley Harewood as a screen and shot low past Dimitri Zimozdra to put Tigers 2-1 ahead.

Telford had an opportunity to increase the lead with a power play but could not score and Day was called on once again when Hewitt led a short handed breakaway but Day made a terrific block to deny Hewitt.

The period ended with Tigers ahead on the night but still needing two more goals to force overtime.

An early goal in the third period saw Tigers up against it. Brady Doxey took advantage of a defensive slip to beat Day with a shot that went in off the cross bar.

Tigers thought they had a way back into the game with a third goal but the officials ruled the goal out as they deemed the shot had been tipped in with a high stick. This proved to be the last chance for Telford and, despite pulling Day from the goal for the final three minutes to add an extra attacker, they could not score and saw Sheffield lift the cup on aggregate.

After the game Head Coach Tom Watkins, commented, “Congratulations to the Steeldogs and Ali Cree who has worked so hard with the club, they are worthy winners tonight, they made it very difficult for us to create much offence and played a really solid game all night. We knew it was going to be hard to overcome the three-goal deficit but all we asked was that we gave ourselves a chance and going into the third period leading 2-1 we were happy with where we were but their equalising goal early in the third period gave us too much to do and took any pressure off them we may have been able to create. It was a solid all-around effort by the team but in reality, we lost the tie in Sheffield. That first leg came on a weekend when perhaps we were eyeing a bigger prize with a huge game against Swindon the next day to try to secure the league title. It shows how competitive this league is with all three competitions so far this season being won by three different clubs.”