Tigers Make it Four in a Row on the Road 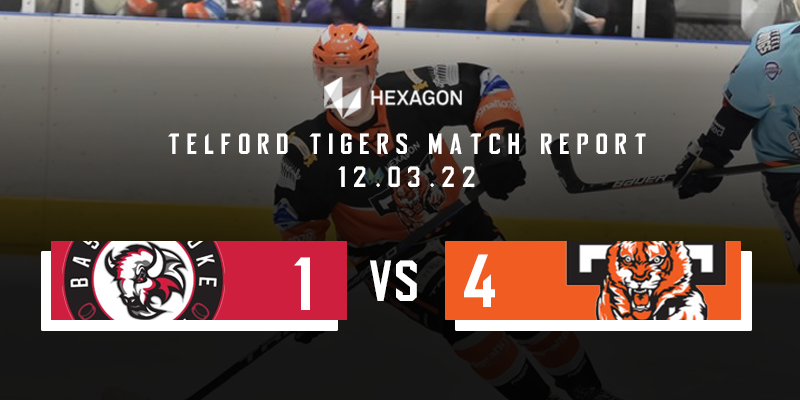 The opening stages of the first period were even with both teams failing to create any clear cut chances. Tigers took the lead in the fifteenth minute with a well-worked goal. Sam Watkins and Fin Howells combined to set up Andy McKinney who shot low past Jordan Lawday in the Bison goal to open the scoring.  Bison struck back with a goal just eleven seconds from the end of the period. Alex Roberts’ shot from a wide position hit Brad Day’s glove and deflected past him into the net.

Basingstoke opened the second period on the front foot and Day had to react quickly to make a double save from Zack Milton. Bison thought they had scored midway through the period when a shot from Ryan Sutton went past Day but referee Poulton waved it off as the net had been dislodged from its moorings prior to the puck entering the net. A decision that the home crowd loudly disagreed with. Late in the period, Tigers were forced to kill off a Basingstoke power play after Thomas McKinnon was called for interference. Tigers’ penalty kill was superb, blocking everything thrown at goal and ensuring that the game remained tied at 1-1 at the end of the period.

The third period was less than a minute old when Tigers regained the lead. Scott McKenzie sent Jack Hopkins in on goal and the young Tigers’ forward sent a brilliant backhanded wrist shot over Lawday’s shoulder to put Telford ahead.

With Basingstoke pushing hard to get the equaliser, Tigers were looking to catch the Bison on the break and with the game entering the final four minutes, Telford added a third goal. A mistake by the Bison defense allowed McKenzie to find Ricky Plant in front of the goal. Plant used all his years of experience to wait out Lawday and slide the puck past him as he dived to prevent the shot.

Tigers rounded off the scoring two minutes later when Hopkins pounced on a defensive turnover and sent the puck to Austin Mitchell-King who shot past Lawday to seal a terrific win.

With Milton Keynes losing at home to Leeds, they drop to third place in the table and are replaced by Swindon who beat Bees at home. Tigers lead at the top is eight points with seven games left.

After the game Head Coach Tom Watkins, commented, “It was a very important win, we played a very good third period after two very competitive periods that were very close and hard-fought. I think that might be our first win in Basingstoke in two seasons and what an important time to finally break that bad run. I think mentally we were very determined, very focused and particularly in the third period very clinical. We scored some very good goals, well taken and scored at the right time. Overall, it was a very gritty solid performance from everyone.”