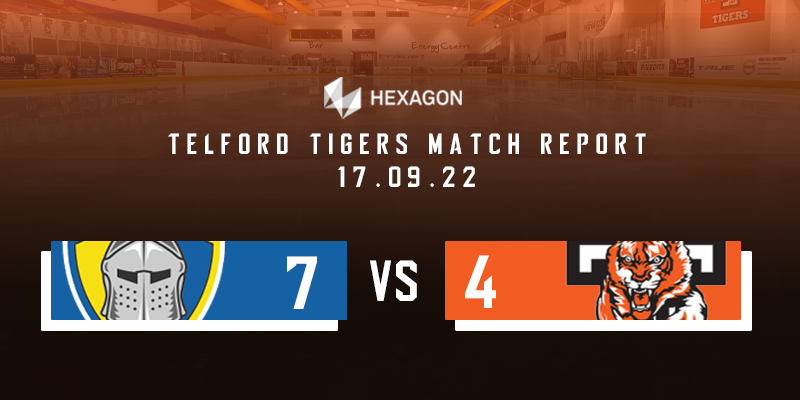 Tigers Opening Day Loss. Hexagon Telford Tigers opened the defence of their National League title with a trip to Yorkshire to take on Leeds Knights. Tigers pre-season had ended last week with heavy defeats to Swindon and the defending champions were looking to hit the ground running in the opening weekend of the league season.

Tigers started the game without their two most experienced players with Jonathan Weaver and captain Jason Silverthorn unable to play.  Rhodes Mitchell-King and Daniel Mulcahy made their competitive debuts for the team.

Tigers made an awful start to the game and found themselves two goals down within the opening two minutes. First Kieron Brown scored and was closely followed by a goal from Grant Cooper as Tigers were caught cold.

As the game progressed Tigers started to get their game going and halved the deficit with Scott McKenzie picking out the unmarked Vladimir Luka who smashed a shot past Sam Gospel in the Leeds’ goal to get Telford’s first goal of the season. Shortly after Tigers had a power play after Cole Shudra was called for tripping but the opportunity was wasted. Almost immediately after killing off the penalty Leeds were shorthanded again when Ethan Hehir was awarded a tripping penalty. This time the power play unit performed better and Tigers drew level. Fin Howells passing to Brodie Jesson who beat Gospel with a low shot.

But, Tigers would only be level for two minutes as Leeds regained the lead when Cooper scored his second of the game beating the Tigers’ defence and shooting past Brad Day unopposed. With the period ending, Leeds added a fourth when Brown sent a terrific pass to Matt Haywood who shot past Day.

Worse was to follow early in the second period when Cooper completed his hat trick with a superb shot that flew past Day to give Leeds a fifth goal.

Tigers showed some fight and narrowed the deficit three minutes later when Luka buried a wrist shot past Gospel from close range leaving Tigers two behind going into the third period.

The next goal was scored by Telford. Brown was awarded a tripping penalty for Leeds and the Telford power play unit scored within seven seconds. Luka shot straight from the face off and Mulcahy managed to tip the puck past Gospel to give Tigers a fourth goal.

Leeds struck back with ten minutes to go, Shudra scoring to restore Leeds’ advantage to two goals. Leeds then put the game beyond Tigers with a seventh goal, Brown beating Day to seal the contest with his second of the game.

After the game Head Coach Tom Watkins, commented, “It was a disappointing start for us but we found our way with a much more disciplined controlled performance in the second period and managed to turn the momentum in our favour. Going into the third period we felt we could get something from the game despite being two goals behind.  For the first ten minutes in the third period we kept pushing. The team put in a very committed performance, all the players worked hard and we

felt we could still win the game when we reduced their lead to just one goal.

It was a frustrating finish to the game for us but there are still plenty of positives to take from the game.”