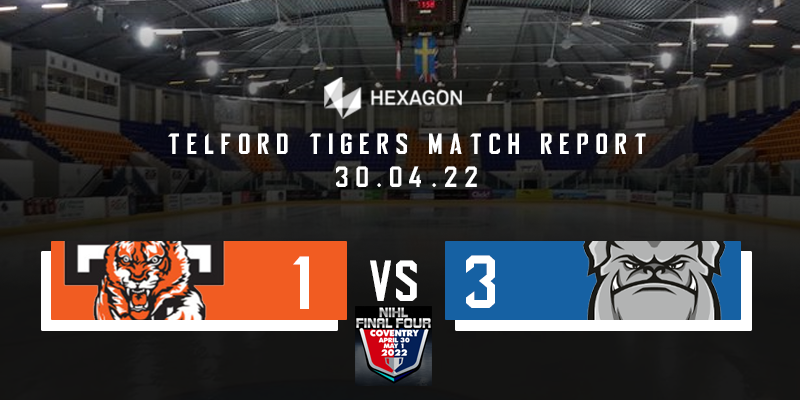 Tigers’ Season Ends with Playoff Defeat. Hexagon Telford Tigers travelled to Coventry Skydome for the first semi-final of the NIHL Final Four Playoffs. Tigers had comfortably won the NIHL National League championship but had lost the National Cup Final to Sheffield and had the opportunity to put the record straight. Tigers had won their playoff group to qualify as number one seed and had a terrific run of only one defeat in 12 games.

The Shropshire side made a bright start to the game and were the better side for much of the first period. Bayley Harewood drew the first save from Dimitri Zimozdra in the Sheffield goal in the opening minute.

Alex Graham went close for Sheffield with a wrist shot that hit the crossbar and bounced away before Sheffield could get the rebound.

Vladimir Luka was caught with a high stick away from the puck, drawing blood but none of the four officials saw the infraction so no penalty was called.

Tigers spent much of the midway part of the opening period on the power play after Sheffield took three consecutive penalties. Despite the numerical advantage, the power play unit created few chances and Sheffield survived without conceding.

Danny Rose almost conceded a bizarre goal when he passed from behind the Tigers’ goal but his pass hit netminder Brad Day on the pad and Rose was very fortunate the puck did not go into the net.

Early in the second period Day was called on again with a terrific save from Graham but could do nothing to prevent Sheffield from taking the lead. A Lee Haywood shot from the right circle snuck past him at the near post to put the Steeldogs ahead.

Tigers were then forced to kill off an extended 5-on-3 power play for Sheffield after Jason Silverthorn and McKinney were awarded penalties. Day made two crucial blocks to keep Sheffield out.

Sheffield went further ahead three minutes from the end of the second period. A face-off win by Andreas Valdix was shot straight at goal by Henry Adams and flew past Day to double the Steeldogs’ lead.

Tigers entered the third period chasing the game and were almost caught out on the break but Lee Bonner was denied by Day and then Matt Bissonnette hit the post.

Tigers threw everything at Sheffield and gave themselves hope with a goal 90 seconds from the end of the game. A long-range shot from Andy McKinney beat Zimozdra low down to halve the deficit.

Tigers called a timeout and when play restarted, pulled Day from the goal to add an extra attacker but after a defensive turnover, Graham scored into the empty net to send Sheffield into the final and end Tigers’ season at the semi-final stage.

After the game Head Coach Tom Watkins, commented, “Congratulations to Sheffield they got the first goal and managed to shut the game down from there.  I thought we started very well. We had plenty of speed, and moved the puck well but didn’t take advantage of our power play opportunities which, if we score first, is perhaps a different game. From there I thought we lacked some energy. We didn’t put our stamp on the game and then ran into a run of penalty kills that kept key players off the ice.  It is a disappointing day for us after such a strong league season. A very good league season for us but again, we fall short of our own expectations at the Final Four.”