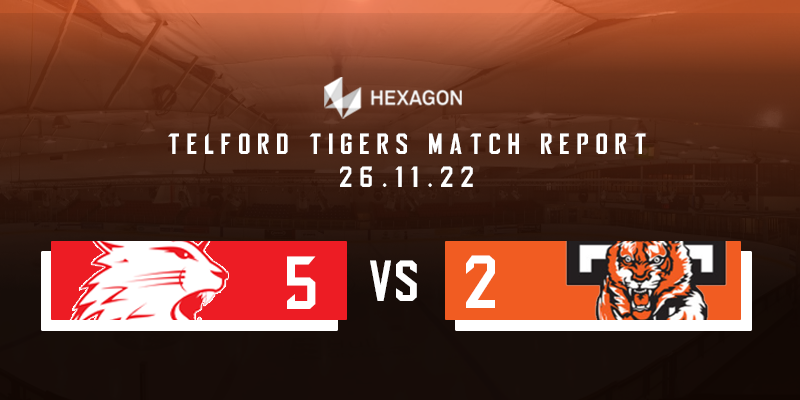 Tigers were almost back to full strength with only Jonathan Weaver, Deakan Fielder and Scott McKenzie absent. Telford welcomed back new signing Henry Adams who rejoined the club from Sheffield Steeldogs in midweek.

Telford made a bright start to the game and should have taken the lead early on, but Brodie Jesson shot over the goal when well placed. Tigers had several power play chances in the first period including a 5-on-3 power play but thanks to some resolute Swindon defending and Renny Marr in the Swindon goal, Tigers drew a blank.

The only goal of the opening period belonged to Telford. Sam Watkins took possession of the puck at centre ice and sent a brilliant behind the back pass to Fin Howells who broke in on goal. Howells passed to Vladimir Luka allowing the Tigers’ forward time and space to lift the puck over Marr and into the net for the first goal of the game.

Defensively, Tigers were found lacking in the second period and conceded three goals in quick succession. The first one had an element of fortune about it with a Sam Godfrey shot that was well wide of the Tigers’ goal but bounced off the back boards and landed perfectly for Balint Pakozdi to shoot into an empty net.

After another fruitless power play for Telford, Tomas Malasinski had just left the penalty box and was sent clear on a breakaway and beat Brad Day with a shot into the roof of the net for Swindon’s second goal.

Swindon scored a third goal shortly after when the unmarked Sam Bullas shot past Day from close range.

Tigers fought back and scored a second goal in the final minute of the second period. Jesson’s cross ice pass from the Swindon blue line, picked out the unmarked Luka who shot low past Marr to halve the deficit.

Despite that goal, Tigers never looked like getting back into the game and a disappointing third period saw the team concede a further two goals. Chris Jones got on the end of a Russell Cowley pass and scored a fourth goal for Swindon. That was followed by Pakozdi scoring his second of the game with a shot from high in the slot that flew past Day to seal the game.

Tigers head home to face the Bees and will be looking to put a disappointing performance behind them.

After the game Head Coach Tom Watkins, commented, “I think the only positive I can take from the day is that the post-game fish and chips were as good as ever! Our power play never got a sniff of a goal despite five or six chances, and we had a 5-on-3 power play where we barely got a puck to the net. After the first period we were second best in every department.”