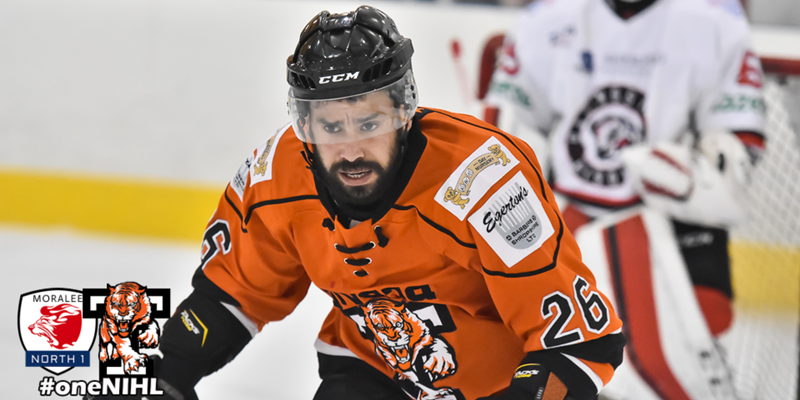 Telford Tigers 1 took on Basingstoke Bison in the NIHL National Cup on Sunday night in Telford. Tigers sat 2nd in the group after home and away wins over the Bison in the previous meetings in this competition. Tigers came into the game off the back of a disappointing 3-2 defeat against Sheffield Steeldogs the previous evening. Tigers iced Scott McKenzie for the first time at home since his return to the club earlier this week but were without Jonathan Weaver and Jason Silverthorn. U18 player Ryan Lewis was again back up net minder.

The 1st period was even, with both teams starting slowly and not creating much in the way of chances. Bison scored the only goal of the period in the 17th minute when they were on the power play. Tom Watkins was serving a hooking penalty when Bison Captain Aaron Connolly tipped Ivan Antonov’s shot from the blue line past net minder Dennis Bell into the roof of the net.

The 2nd period saw Tigers under pressure from the start and Basingstoke missed 2 good chances with Ryan Sutton and Danny Davies both firing over the goal from close range. But in the 26th minute Tigers went further behind when Sutton scored on the rebound from Grant Rounding’s shot. Bison then added a 3rd goal just 2 minutes later when Davies was left with a tap in at the far post after neat passing from Bison left him with an empty net.  Things got worse for Tigers in the 30th minute when defender Danny Rose was given a 5 minute match penalty for boarding and ejected from the game. Shortly after, Bison added a 4th goal when Connolly fired home a wrist shot to score his 2nd of the night and leave Basingstoke with a commanding lead at the end of the period.

Tigers finally got on the score sheet in the 42nd minute when Joe Miller tipped Ricky Plant’s shot into the net over the Bison net minder’s shoulder. And Tigers gave the fans hope of a comeback in the 48th minute when Corey Goodison blasted home a powerful slap shot into the bottom of the net, from the blue line to bring the Tigers to within 2 goals.  But despite some pressure late on, there were no further goals as Tigers fell to a 2nd defeat of the weekend.

Man of the match – Dennis Bell

After the game coach Tom Watkins said, “Tonight was not the type of performance we want or expect at home. We were flat, played with no energy, no desire and no commitment. It was a very disappointing performance against a team that were short benched.” Watkins added, “We made no contact when we should be finishing hits, we should be forcing the opposition to turn over pucks through playing with the intensity that is required. The only player that comes out of tonight who can hold his head up high is Dennis Bell. He’s been backstopping us all season so far and we need to provide better coverage in front of him.”