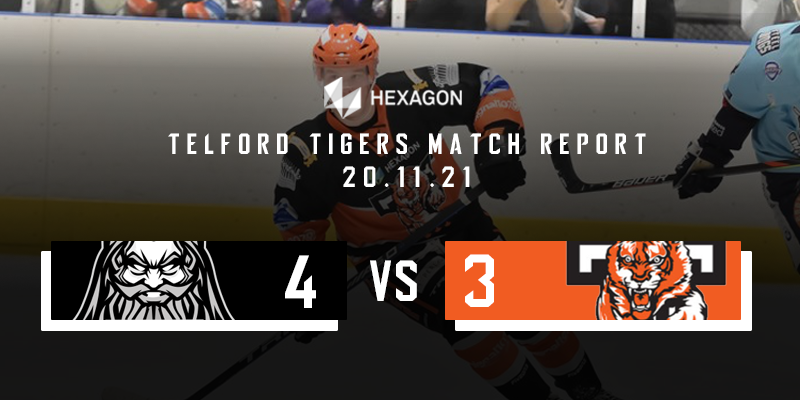 Tigers Struck by Lightning. Hexagon Telford Tigers travelled to Milton Keynes to take on the Lighting in their only game of the weekend. Tigers participation in the Autumn Cup ended on Wednesday after a defeat to Swindon Wildcats over two legs but they came into the game having won seven league games in a row.

Tigers continued to be without the services of Ricky Plant, Ross Connolly and Jack Watkins.

Tigers dominated much of the possession in the first period and finally got their reward in the fifteenth minute. Jason Silverthorn passed from behind the goal to Joe Aston who hammered home past Jordan Hedley in the Milton Keynes’ goal, to give Tigers the lead. Despite the Tigers’ dominance, Lightning were level before the end of the period. Bobby Chamberlain scored for Milton Keynes with Corey Goodison unable to defend at the side of the Tigers’ goal after being struck in the leg by a puck, allowing Chamberlain to tap home past Brad Day.

Tigers lost all their fluidity in the second period and conceded two goals. Sam Talbot scored with a shot that deflected off Day and then Russell Cowley scored from a rebound after Day had saved Ben Russell’s initial shot. Tigers took far too many penalties and were unable to pressure the Lightning goal enough and trailed by two at the end of the period.

Further penalties caused Tigers to spend far too long on the penalty kill. However, they were able to pull a goal back as Andy McKinney left the penalty box after serving a dubious slashing call. McKinney skated out of the box, got the puck and shot low to Hedley’s right to cut the lead to one.  Tigers shot themselves in the foot though, immediately after getting back in the game as the momentum was building and Milton Keynes were under pressure, Nick Oliver took a holding penalty gifting the Lightning a power play. Leigh Jamieson scored with a long-range shot that Day couldn’t see as he was screened by a Milton Keynes’ forward.

Tigers refused to give up and narrowed the lead again with a power-play goal of their own. Jonathan Weaver smashing a trademark slap shot past Hedley to give Tigers hope with three minutes left. But, even with Day pulled from the goal for the final minute to give Telford an extra attacker, they couldn’t score and lose a close game by a single goal.

After the game Head Coach Tom Watkins, commented, “I’m disappointed to lose tonight and think we all feel we let this one slip but when you have to come from behind it’s a much more difficult task. We came up against a hot goalie tonight who made a string of saves through the first period to keep the scores even and then pushed very hard in the third period to tie the game and despite penalties affecting our flow, I think we would have tied the game up.

We’ve got a few guys out at the minute and they’re a loss for sure in terms of ability but also in the fact that they allow other players to rest during the game.

We’ve had a great start to the season, winning seven straight games in the league, we can be very proud of that run and can take plenty of positives from those wins and tonight’s loss. We’ve got a bunch of extremely talented young players who are improving and learning all the time and all are playing key minutes for us which is a huge positive.”