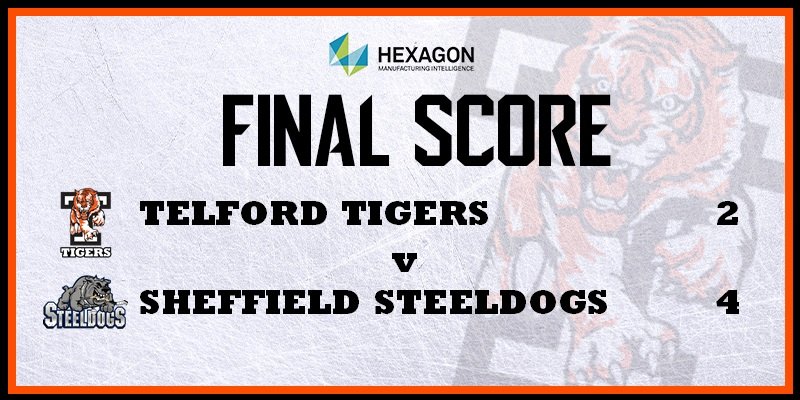 Tigers Suffer Late Home Defeat. Hexagon Telford Tigers faced off against Sheffield Steeldogs on Sunday night at Telford Ice Rink. Tigers had won the previous evening 5-2 away to Milton Keynes Lightning and had won their previous five meetings with the Steeldogs. Tigers had won in Sheffield last Sunday and were looking to solidify their position on top of the league.

Tigers were missing Jonathan Weaver and Ollie Lord but were able to add James Smith to the lineup.

In goal for Telford was Brad Day, with Dimitri Zimozdra starting for Sheffield.

Tigers made a strong start to the game, threatening Zimozdra’s goal from the first whistle but with Sheffield’s first attack of note, they scored to take the lead. Brad Doxey somehow squeezed the puck past Day and into the roof of the net from an extremely tight angle. Tigers responded almost immediately with a goal of their own. Jason Silverthorn blocked a Sheffield clearance with his stick, took control of the puck and shot at Zimozdra, who parried the shot but left a rebound for Silverthorn to collect and shoot into the net to level the game. Tigers continued to pour forward and create chances but fell behind again in the eighth minute. A Reece Cochrane shot was saved by Day but Alex Graham was on hand to fire home the rebound to put Sheffield ahead.

Tigers’ performance deserved better and both Dominic Florian and Scott McKenzie went close, with Brandon Whistle hitting the post to compound Tigers’ luck. Day made a magnificent save from Jan Danecek, who looked certain to score. Day blocked the first shot then threw himself back to deflect the second shot away. Tigers ended a frustrating period behind on the scoreboard.

Tigers penalty kill had been in top form in the previous game and it needed to be so again when Tigers had to fight off a 5-on-3 power play for Sheffield. Corey Goodison was already serving a delay of game penalty when Thomas McKinnon was called for tripping. Tigers worked hard and kept Sheffield out with some good defensive play. Tigers’ power-play unit then got some time with Sheffield taking four consecutive penalties. With Jack Brammer in the penalty box, Tigers finally broke through and levelled the game. Scott McKenzie passed from the left circle to Silverthorn who was stood in the slot, the Tigers’ captain hammered a one time slap shot past Zimozdra and into the top left-hand corner of the net to send the sides into the break level at 2-2.

A frustrating third period saw Tigers go close a number of times but Zimozdra was playing well and proving hard to beat.  Fin Howells hit the crossbar for Tigers and McKenzie and Whistle forced good saves from Zimozdra. With four minutes of the game left, as Tigers were pushing for a goal to win the game, Sheffield broke away and took the lead. Craig Elliot sent a pass to Nathan Salem who broke in on goal and sent a superb shot past Day to put Sheffield ahead 3-2. Tigers pulled Day from the goal for the final minute of the game and pushed forward seeking an equaliser but could not score. Ben Morgan sealed the victory for Sheffield with a late empty-net goal.

Tigers’ disappointment at the loss was slightly alleviated by the fact that closest rivals Swindon lost earlier in the evening to Peterborough, meaning Tigers still held a six points lead at the top of the table.

After the game Head Coach Tom Watkins, commented, “After two standout performances against Swindon and Milton Keynes we couldn’t find the same intensity this evening, sadly. We were at home against a team who worked tirelessly, battled and outcompeted us for 60 minutes. We got what we deserved, Sheffield were simply the better team. It was a constant battle and we couldn’t get any real flow in the game, after lots of big games of late that I’m sure have taken their toll on the boys. My biggest frustration was at 2-2 in the third period and after two excellent penalty kills, we didn’t take control, grab the momentum and win the game like we have been able to so many times this season.“

Hexagon Telford Tigers 1 will next be in action at home on Sunday 9th February against Sheffield Steeldogs. Match Night tickets available to purchase here!