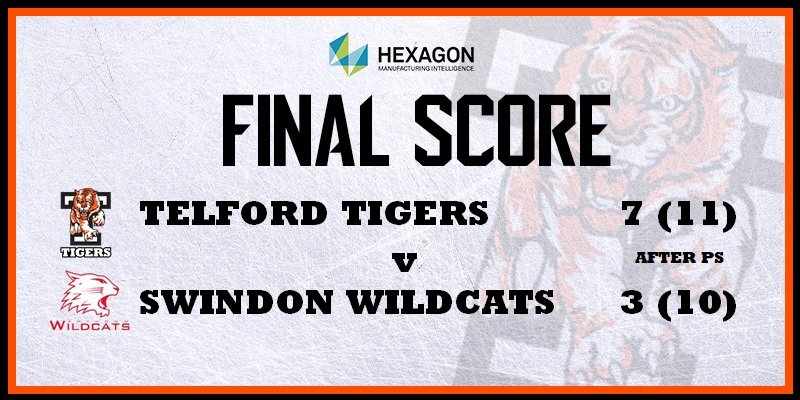 Watkins Salutes Sensational Tigers Comeback. Hexagon Telford Tigers faced off against Swindon Wildcats on Wednesday night in the second leg of the National Cup semi-final. Tigers started the game behind by three goals after losing the first leg in Swindon 7-4.  Tigers had ended a four-game losing streak with a victory over Sheffield Steeldogs in their previous game. Telford were without Jonathan Weaver, Ollie Lord and James Smith.

Telford started with Brad Day in goal and Renny Marr started for Swindon.

The game started at a very fast pace with Tigers desperately trying to get an early goal. Marr was under constant pressure and was fortunate that when he fumbled a Corey Goodison shot, there was a Swindon defender there to clear. Swindon were dangerous on the break and Tomasz Malasinski broke in on the Tigers’ goal but was denied by Day. Scott McKenzie went closest for Tigers but his wrist shot hit the crossbar. Tigers were then left cursing their luck when Ricky Plant was stripped of the puck in the Swindon zone which led to a 2-on-1 breakaway which Malasinski led and set up Aaron Nell who buried the puck past Day to give Swindon the lead and increase their aggregate lead to four. Tigers rallied and continued the pressure, McKenzie forced a terrific save from Marr with the Swindon netminder throwing himself across the goal crease to prevent a certain goal. Jason Silverthorn then hit the post with a wrist shot and Tigers fans began to think that it wasn’t their night when Dominik Florian broke away but mishit his shot allowing Marr to save.  Day then kept out a Tyler Vankleef shot, knocking the puck out of the air with his goal stick as it was heading into the net. Florian then had his second breakaway of the period and this time he made no mistake, scoring with a terrific wrist shot past Marr to level the game and send Tigers into the break level on the night.

Tigers continued in the same vein in the second period but were thankful early on that Swindon’s Chris Jones shot wide of an open goal. Tigers took the lead shortly after with a goal from Fin Howells. The young Tigers’ forward deflecting the puck home from close range after good work by Ricky Plant. But Swindon struck straight back with a power-play goal to level the game at 2-2. Tigers’ luck once again deserted them as McKenzie led a short-handed breakaway and sent a pass cross-ice to where Ross Kennedy was poised to unleash a slap shot but the puck got deflected away from Kennedy allowing Swindon to break and score through Edgars Bebris.  Marr’s goal was leading a charmed life with a shot being deflected wide and through the goal crease but not in. As the period drew to a close Tigers were presented with a power-play when Tyler Plews was called for holding. Andy McKinney and Danny Rose set up McKenzie who scored at the second attempt after Marr had blocked his initial shot. At the end of the period, Tigers led on the night 3-2 but still trailed on aggregate by two goals.

Tigers reduced the deficit even further early in the third period with a terrific goal from Brandon Whistle. McKenzie fought hard for the puck and managed to win it from a Swindon defender and find the unmarked Whistle who waited patiently for Marr to commit and then took the puck around him and scored. Tigers were then pegged back by a short-handed goal from Swindon. Whilst Stephen Whitfield was serving a hooking penalty for Swindon, Bebris broke away with Jones, who scored to make the score 4-3 to Tigers. With ten minutes remaining, Telford needed two goals. Thomas McKinnon battled in the corner of the Swindon zone and won the puck, skated around the goal and managed to squeeze the puck past Marr from almost on the goal line to make it 5-3. Four minutes later Tigers scored again. Florian setting up Jack Watkins to score the crucial goal that put Tigers 6-3 ahead on the night and the sides level on aggregate.

Tigers thought they had won the game three minutes from the end of the period when McKenzie scored but the referee had already called a penalty against Swindon and ruled the “goal” out.

The game went to overtime and both teams would have chances to win but neither side could get the crucial goal, meaning the game would be decided by penalty shots.

Swindon went first, with Vankleef’s shot saved by Day. Florian went first for Tigers but he fluffed his shot and Marr saved easily. Nell missed for Swindon and was followed by McKenzie hitting the post. Malasinski went third for Swindon and Day denied him with a pad save.  Whistle stepped up knowing if he scored, Tigers would win and he made no mistake with a superb wrist shot past Marr to send the Tigers’ fans wild and the team into the cup final.  Tigers will play the winner of Peterborough Phantoms v Hull Pirates in the final.

After the game Head Coach Tom Watkins, commented, “What a phenomenal achievement this evening. To start from three goals behind and to go four behind early in the game and still go on to win the tie is simply amazing. The guys played at another level this evening. They gave it everything they had and that work ethic gave us the chance to have a successful conclusion in a shootout.

What a game of hockey from a neutral’s perspective! I’ve got to salute the fans tonight. It was a great crowd for a mid-week game, they stuck with us all night. I also have to give my respect to the number of Swindon fans that made the trip this evening as well. At four goals behind, the Telford fans stuck with us, they inspired us to one of the most memorable Tigers victories. This group of players keeps on surprising us all. They put in one heck of an effort and got their reward.“

Hexagon Telford Tigers 1 will next be in action at home on Sunday 2nd February against Sheffield Steeldogs. Match Night tickets available to purchase here!