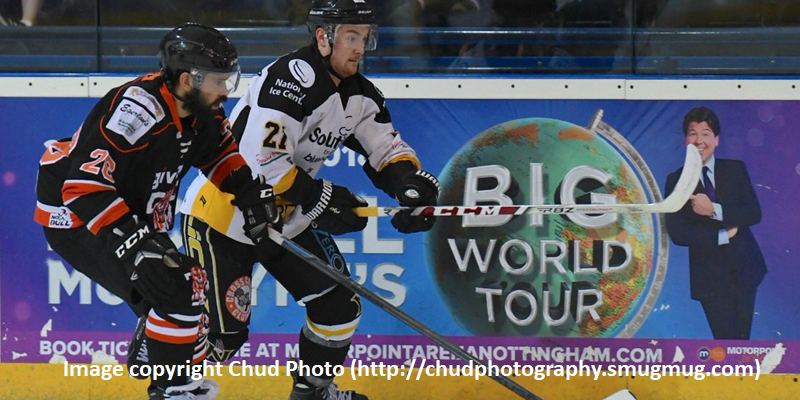 Telford Tigers 1 took a short road trip to Nottingham Arena on Sunday night to face off against Nottingham Lions in a NIHL Moralee Division game.  Tigers had climbed up the table into 2nd place on Saturday with an 11-1 defeat of Deeside Dragons and were looking to close the gap on leaders Sheffield Steeldogs.

The 1st period saw Tigers dominate from start to finish.  Just 2 minutes into the game Corey Goodison scored with a slap shot from the point which deceived the Nottingham net minder. Scott McKenzie then went close with a shot from close range. Tigers scored their 2nd goal in the 9th minute whilst on the power play.  Jack Watkins back handed the puck into the net after Goodison’s initial shot was saved.  Net minder Dennis Bell made a terrific save in the final minute of the period to leave Tigers 2-0 ahead at the break.

The 2nd period continued in the same vein. In the 22nd minute Brodie Jesson scoring his 2nd senior goal and 2nd of the weekend after being sent clear by a pass from Warren Tait. In the 25th minute Jack Watkins scored his 2nd of the night, tapping home from Ricky Plant’s pass to give the Tigers a 4 goal lead. The 5th goal was scored a minute later by Joe Miller. Plant weaved through the Nottingham defence and set up Miller in front of goal to fire home. In the 33rd minute, Tigers scored their 6th of the night after Scott McKenzie was hauled down when clear through on goal and awarded a penalty shot. McKenzie made no mistake, deking the net minder and sliding the puck home.  The remainder of the period saw no more goals on the scoreboard but did have several fights. Both Warren Tait and Joe Humphries followed by Adam Jones and Joe Gretton dropping the gloves. Tigers ending the period with a 6 goal lead.

Tigers scored their 7th goal just 2 minutes into the 3rd period when McKenzie scored his 2nd of the night, tipping Jordan Stokes’ shot into the net. Tigers came close shortly after when Watkins hit the post and then Dale White also hit the post twice in quick succession. In the 54th minute, Watkins completed his hat trick with a powerful wrist shot from the right circle. The final goal of the night was scored in the 56th minute by Jesson after great work by Dan Mitchell behind the goal. Net minder Bell picked up his 3rd shut out of the season and Tigers achieved a 4 point weekend.

Man of the match – Brodie Jesson.

After the game Coach Tom Watkins said, “I thought we were pretty clinical this evening, we moved the puck well and created a lot of offence. Their goalie was very busy and put in a fine display with some big saves.  Watkins added, “Honourable mentions go out to Jack (Watkins) for a solid hat trick, and the young lads Brodie (Jesson) and Dan (Mitchell) who were excellent this evening, it’s fun to watch then develop.”