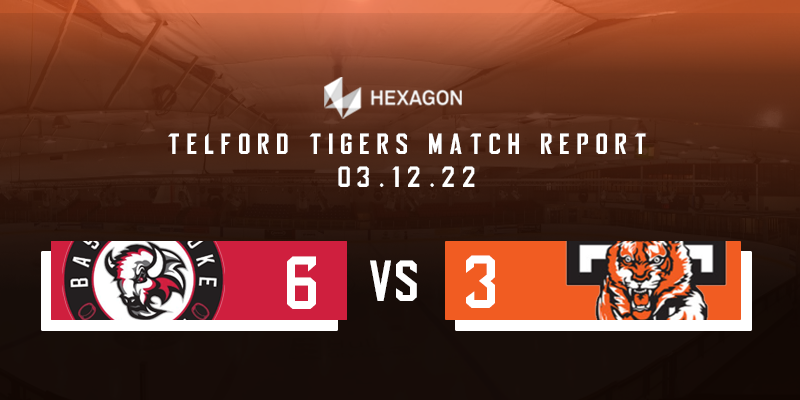 Tigers’ Winless Run Continues. Hexagon Telford Tigers travelled to Basingstoke to take on the Bison and were looking to end their recent run of poor form. Tigers came into the game on the back of three consecutive defeats after losing both games last weekend and also against Leeds at home the week before.

Telford were given some good news in the buildup to the game, a potential six game ban for Jason Silverthorn had been overturned after the club appealed against his match penalty in the previous game against Bees last Sunday. Also, Scott McKenzie returned to the lineup after missing several games recently.

Tigers recent form added to their poor recent record in Basingstoke gave the fans concern that the winless run would continue and with just over a minute of the first period gone, Basingstoke took the lead through a long range shot from Thomas Banner that went through Brad Day’s legs and into the net. Tigers hit back midway through the period with a goal which saw McKenzie’s initial shot saved before Ricky Plant applied the finishing touch to draw Telford level.

Basingstoke regained the lead in the final minute of the period with a goal from Tom Barry, who was given far too much time in front of the goal and shot past Day for Bison’s second goal.

Early in the second period, Tigers equalised again whilst on the power play. Gael Lubwele was assessed an interference penalty for Basingstoke and Tigers took full advantage of the extra attacker with Silverthorn the provider again, setting up Vladimir Luka to smash home a shot past Jordan Lawday in the Bison goal.

The lead only lasted a few minutes as Basingstoke went ahead again with a goal on their own power play.  With Jack Watkins in the penalty box, Brendan Baird put the Bison in the lead for a third time.

Bison scored a fourth shortly after, with Barry getting his second goal of the game to send Telford reeling. Head Coach Tom Watkins called a time out after the goal to settle the team down. The tactic worked as Telford scored a third goal within a minute of the time out. Tigers broke away on goal and Plant and Silverthorn combined to allow McKenzie to score past Lawday and get Telford back into the game.

But before the period had ended, Bison had a fifth goal. Zack Milton shooting past Day from close range after a pass from behind the goal by Lubwele.

Tigers fought to get back in the game in the third period and had a power play chance with ten minutes of the game left after George Norcliffe was sent to the penalty box. But the power play unit was unable to reduce the deficit and some sensible game management by Basingstoke saw them run out the clock. Baird added a late empty net goal to seal their victory and send Tigers crashing to their fourth consecutive defeat.

After the game Head Coach Tom Watkins, commented, “We had a bad start and gave up a soft goal that we as a team have to stop. That’s the last two games we have gone behind in the first two minutes. We got better, established a lot of end zone time and created opportunities in the first period but then we let in three soft goals where the puck is on our stick and we don’t deal with their fore check pressure. It was good to see our power play back on the scoreboard but it is somewhat irrelevant when we are not picking up the win. Mentally the team has to be more resilient, more dogged and not allow the other team into the game so easily.”