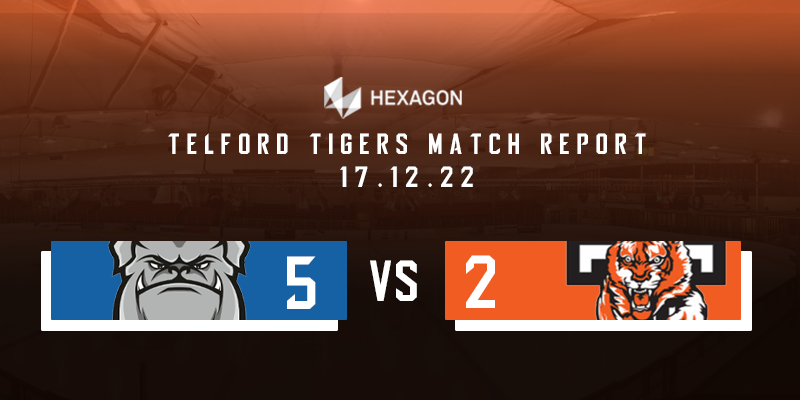 Tigers Winless Woes Continue. Hexagon Telford Tigers travelled to Yorkshire for a National League game against the Steeldogs looking to break an unwanted record of seven consecutive defeats. With Sam Watkins and Rhodes Mitchell-King away with Great Britain U20s and Jonathan Weaver unavailable, Adam Taylor was added to the line up.

Tigers were low on confidence, made a slow start to the game and conceded first. A long range shot from Cameron Brownley went over the glove of Tigers’ netminder Brad Day and into the net with Day screened by one of his own defenders and unable to react in time to stop the shot.

As the game progressed Tigers started to put some pressure on the Sheffield goal and they were finally rewarded when a shot from Jake Price was expertly directed past Dimitri Zimozdra in the Sheffield goal by Jason Silverthorn.  In the final minute of the first period, Telford took a much needed lead. Danny Rose sent a shot from a tight angle in on goal and was looking for a Tigers’ forward to get a stick to the puck to deflect the shot but somehow the puck went straight in to the goal, much to everyone’s surprise, giving Telford the lead.

Despite holding the lead it was all downhill for Telford from the start of the second period onwards. Jordan Buesa was given far too much time to skate through the middle of the Tigers’ defensive zone and he buried a shot past Day to draw the sides level. Shortly after Ricky Plant was called for an unnecessary holding penalty, gifting Sheffield a power play.  The Steeldogs regained the lead with a scrambled effort from Matt Bissonnette a minute into the power play.

Telford were then handed a glorious chance to get level when Jack Brammer was given a match penalty for slew footing and ejected from the game. Tigers had a full five minutes power play across the final minute of the second period and the opening minutes of the third period. But despite the extended man advantage Tigers’ power play unit barely troubled Zimozdra and the chance was wasted.

Sheffield added a fourth goal, to effectively end the contest with ten minutes of the game left. A breakdown of play in the Sheffield offensive zone saw Buesa break away on goal unopposed and he shot low past Day for his second goal of the game.

A late empty net goal for Lee Haywood sealed the victory for Sheffield and saw Telford slump to an eighth defeat in a row as their winless run continues.

After the game Head Coach Tom Watkins, commented, “When things are not going your way you have a tendency to grip the stick, make slower decisions, and make uncharacteristic errors. All of this has a big knock on effect to that specific situation rather than playing with your instinct and playing fast.  Our power play at the start of the third period was a prime example of that. The team are still battling, still blocking shots with their bodies, making hits and trying to make a difference but unfortunately we haven’t had the quality we need at times to be on the right side of a positive result. It would be great to see the fans pack the rink in our next game against Swindon and get right behind the team and show their support for this group of players. We need their help to get us out of this slump we are in.”